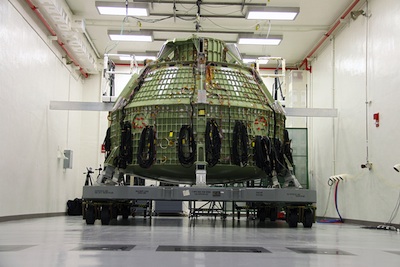 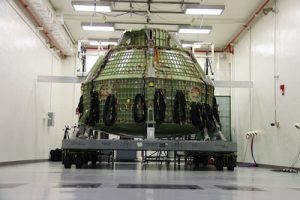 On November 19, a NASA spokesperson announced that the flight model of the agency’s Orion crew capsule cracked an aft bulkhead during a proof pressure test earlier in the month. The capsule is expected to be repairable and the incident will not delay Orion’s first test flight in 2014.

“The cracks are in three adjacent, radial ribs of this integrally machined, aluminum bulkhead,” said NASA spokesperson Joshua Buck. “The cracks did not penetrate the pressure vessel skin, and the structure was holding pressure after the anomaly occurred.”

There is no word yet as to what may have led to the cracking. Associate Administrator for NASA’s Human Exploration and Operations Mission Directorate William Gerstenmaier suspects that the culprit could be a beam bolted to the bulkhead’s ribs, which  “may have been a little stiffer than some of the models portrayed.” To find out, the cracked region is being removed and examined under an electron microscope. Orion prime contractor Lockheed Martin is leading the investigation.

It took Lockheed Martin about one year to built the Orion flight model. It is not known how long it might take to repair the model. So far, the expectation is that Orion will make its late 2014 debut flight on schedule. The flight, known as the Exploration Flight Test-1, or EFT-1, will take place before its primary launch vehicle, the Space Launch System (SLS), is available. EFT-1 will therefore be launching aboard a Delta-4.

In January 2012, the Soyuz TMA-04M capsule experienced a similar situation when the capsule was accidentally overpressurized during a routine vacuum chamber test. In that instance, the capsule was discarded and the International Space Station Expedition 31 crew was delayed while a new capsule was prepared.