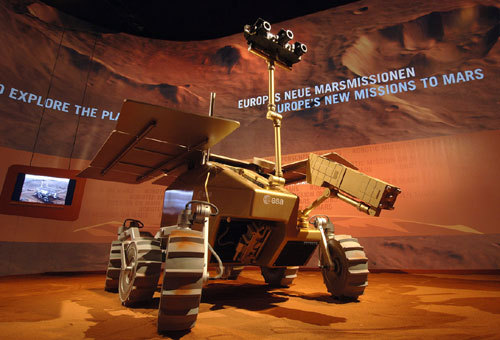 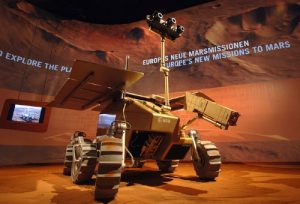 A mockup of the proposed ESA ExoMars rover (Credits: ESA).

NASA insiders are predicting that the upcoming U.S. federal budget request, to be officially announced by the Obama administration on February 13th, will slash NASA’s planetary science program by up to 20 percent and may force the agency to cancel upcoming Mars science missions. Although the exact details of the budget are not known, ESA and Roscosmos officials are already investigating the feasibility of carrying out the collaborative ExoMars mission without the participation of NASA.

“NASA has, I think, already told ESA it’s not going to be able to provide a launch vehicle in 2016,” said John Logsdon, professor emeritus at George Washington University. “So that is going to cause a big international uproar on one dimension. And the planetary community in the U.S. is going to be very unhappy about the fact that there’s no money for major new planetary missions.”

If the rumors are true and NASA is forced to back out of the ExoMars mission, it would require ESA to provide an additional 150 million euros to keep the project alive above and beyond the estimated 850 million euros it has already committed. The estimate is based on a bilateral feasibility study, which assumes that Russia would pick up the majority of the additional costs of the program.

“I’m pretty confident that if we propose something to the member states that would implement the original objectives of ExoMars, the additional €150 million will be possible because everybody thinks ExoMars is a very important pillar for exploration in Europe,” said Rolf de Groot, head of ESA’s Robotic Exploration Coordination Office. However, Johann-Dietrich Woerner, head of the German Aerospace Center DLR, said he found it unlikely that a Russia-ESA mission could be substantially less expensive than the joint ESA-NASA mission, adding that “[DLR] will not accept higher contributions on our part.”

Rumors in late 2012 about potential reductions to NASA’s planetary science program led to the resignation of Ed Weiler as chief of NASA’s science mission directorate, who remarked emphatically to ScienceInsider, “The Mars program is one of the crown jewels of NASA. In what irrational Homer Simpson world would we single it out for disproportionate cuts?” In December, NASA abruptly pulled out of trilateral discussions with Roscosmos and ESA about financing the project, leading the remaining two agencies to push on with alternative options.

The ExoMars mission began as a collaborative 650 million euro technology demonstration between ESA and NASA; however, it soon ramped up to a 1 billion euro mission that would see robotic probes sent to the Red Planet in both 2016 and 2018. The goal of the mission is to demonstrate Martian atmospheric descent technologies, subsurface drilling payloads, and an onboard sample processing and distribution system.

The video below shows an animation of the proposed ExoMars rover.
[youtube http://www.youtube.com/watch?v=ZLOneYBsQmM]