Russia is ready to resume Proton launches on September 15. International Launch Services (ILS), the U.S.-Russian joint venture that sells commercial Proton rocket launches from the Baikonur Cosmodrome in Kazakhstan, announced the conclusion of  its review of the dramatic July-2 failure. In the event, three Russian GLONASS navigation satellites were lost due to the failure of the rocket, just few seconds after the liftoff.

The ILS Failure Review Oversight Board (FROB) concluded its review on August 13, concurring with the conclusions of the Russian State Inter-agency Commission on the root cause and the associated corrective action plan of the July 2, 2013 Proton M/Block DM mission failure with three GLONASS navigational satellites for the Russian Federal Government.

The members of the FROB agreed with the findings of the Russian investigation that the root cause of the failure was due to the improper installation of the three yaw angular rate sensors located on the Proton launch vehicle, which caused the vehicle to deviate from its flight path shortly after lift-off.

“We very much appreciate the time, effort and participation of our customers, the insurance underwriters and technical experts in the FROB process. They worked tirelessly with us to ensure that the review was conducted thoroughly. As we work towards the return to flight of the Proton vehicle, we thank all of our customers for their continued support,” said ILS Vice President of Programs and Operations, John Palmé.

The ILS Proton return to flight mission will be the Astra 2E satellite for SES on September 15, 2013. The scheduling of the remainder of the ILS Proton near term manifest for 2013 is currently being determined.

With the first launch scheduled for mid-September, it is unlikely that Russia will be albe to carry out the five Proton launches previously announced.

UPDATE: Voice of Russia reported that Anatoly Belokon, Roscosmos Baikonur department head, had refuted the alleged plans to launch a Proton rocket from Baikonur on September 15, as originally announced by ILS.

“Fresh launches are out of the question until we clean up the accident aftermath.” 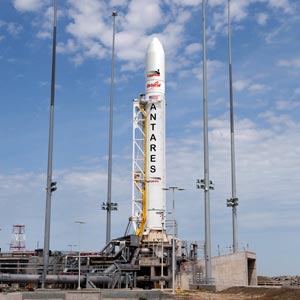 September 15 is also the target day for the first launch to the International Space Station (ISS) of Antares, the rocket developed by Orbital Sciences under NASA’s Commercial Orbital Transportation Service (COTS) contract. The launch will take place from NASA’s Wallops Flight Facility.

In the event that weather or other operational factors require the date to shift, the company will seek to carry out the launch no later than September 19. Currently, the Antares rocket for the COTS Demonstration Mission is completing testing at the Horizontal Integration Facility at Wallops and will soon begin integration with the Cygnus spacecraft. Orbital anticipates that it will roll out the Antares rocket with the integrated Cygnus spacecraft to Pad 0A at the Mid-Atlantic Regional Spaceport on or about September 11 to be ready for a September 15 launch.