A revision to the Commercial Crew Program gives NASA enhanced authority over commercial partners’ safety protocols. The move away from Space Act Agreement contracts for final phase design and testing comes after repeated criticism of the practice from both politicians and safety experts.

In a public letter in March, several US Congressmen urged that NASA be given authority over commercial spaceflight safety protocols. “Proposed agreements between NASA and commercial crew entities fail to provide adequate authority for safety oversight and guidance needed by NASA to ensure the best safety for astronauts operating independently developed crew vehicles,” said Representative Pete Olson (R-TX) at the time. “Safety is the most critical component of human space exploration.”

Following the successful Space X mission and June 4th remarks by NASA Administrator Charles F. Bolden Jr., the U.S. House Committee of Science, Space, and Technology is rethinking its perspective on NASA’s Commercial Crew Program. With the successful resupply mission of Dragon, committee Chairman Ralph Hall (R-TX) of the US House of Representatives took the time to congratulate SpaceX and NASA on their successful mission.

“This was a complex mission and represents an important milestone for NASA’s Commercial Orbital Transportation Services Program that will hopefully result in a reliable capability to deliver supplies to our space station,” said Hall. 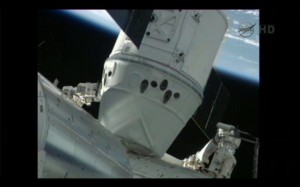 Utilizing a commercial company to restock the International Space Station (ISS) with over one thousand pounds of non-critical cargo is just one avenue of NASA’s commercial outreach. The recent communication from Administrator Bolden outlined NASA’s revised plan to develop a commercial crew program.  Many congressional members are now taking a second look at NASA’s plans.

With the money, lives, and reputation built into human spaceflight, safety has always been a chief concern. NASA’s new revised plan to commercial safety requirements has been met with support by Chairman Hall.

“I am pleased that NASA has agreed to use a traditional federal acquisition approach for the final phase of design and testing, ensuring that NASA will be able to require commercial crew providers to meet the highest levels of safety for their launch systems,” said Hall. “This approach answers many lingering concerns voiced by Members of the Committee on Science, Space, and Technology about uncertainties plaguing the program’s cost, and its ability to mandate crew safety design features.”

While the safety debate is not at an end, Chairman Hall and others on the committee have new hope as they move forward. The Science, Space, and Technology committee plans to hold an oversight hearing on NASA’s Commercial Crew Launch Program later this summer.