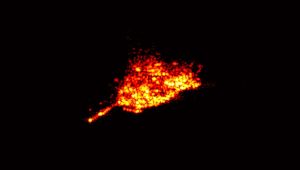 ROSAT, captured by the Tracking and Imaging RAdar (TIRA) at the Fraunhofer Institute for High Frequency Physics and Radar Techniques in Wachtberg, Bonn. This picture was taken on October 20, 2011, three days before reentry: note the antenna mast of the satellite - (Credits: Fraunhofer FHR).

Accordint to German space agency DLR and its partners, including NASA, the Roentgen Satellite (ROSAT) reentered the atmosphere over the Bay of Bengal on 23 October 2011 at 03:50 CEST. It is not yet known whether any part of the satellite has reached the ground. Determination of the time and location of re-entry was based on the evaluation of data provided by international partners, including the USA.

Read the DLR press release. You can see some pictures of the ROSAT satellite taken from the ground by Ralf Vandebergh. Also recommended, “Has Anyone been Hit by Space debris?” In the video, below, a reconstruction of the reentry and disintegration of the satellite.