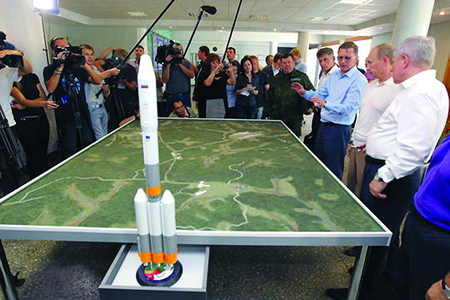 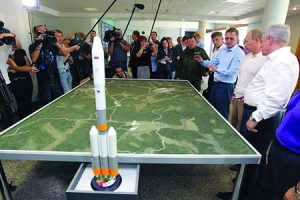 Putin (second from right) inspecting a model of the new cosmodrome (Credits: cosmodromegovernment.ru).

Russia began construction of the Vostochny Cosmodrome in 2011. The Cosmodrome, which is slated for completion in 2018, is intended to replace the well-known Baikonur Cosmodrome for future Russian launches. Although Baikonur’s location is highly useful due to the sparse population surrounding the area and its longitudinal location, there have been tensions between its Kazakh host and Russia ever since the countries were separated following dissolution of the USSR.

The total cost of the project was estimated to amount to $10 billion. In televised remarks on August 31, Russian Prime Minister Vladimir Putin indicated that $1 billion would be spent on the construction effort in 2012 alone. “Only the existence of several space launch pads would guarantee Russia a full independence in space activities,” said Putin.

Russia has a lease for the use of Baikonur until 2050 for a charge of $115 million per year. The new facility is slated to include staff housing along with a complete “modern town” infrastructure. 40,000 people are eventually expected to inhabit the area.  “We aren’t going to repeat the past when they were saving money on people,” Putin said. “It will create a stimulus for the development of the entire far eastern region.”

In the meantime, analysis of the troubled Russian space program continues following the latest Proton-M launch failure. Roscosmos has been given until mid-September to devise a response plan. In a meeting transcript released September 3, Putin asked for suggestions along with announcing the dismissal of Khrunichev Space Center General Director Vladimir Nesterov. “I think the problems lie in the sector’s structural organisation,” Putin noted. Earlier reports of Nesterov’s resignation appear to have been premature, with Khrunichev officially informing the media that only Putin could dismiss the director.

Below, an introduction to the envisioned cosmodrome: