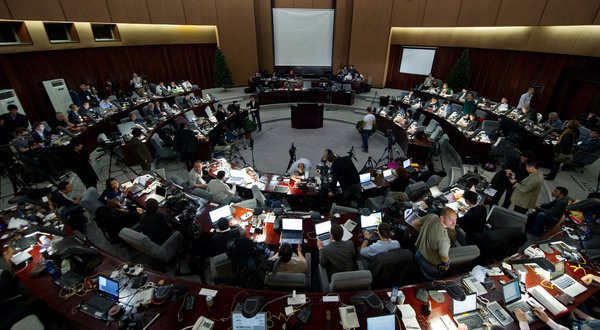 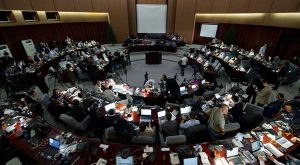 On Monday, April 16, the UN Security Council is scheduled to release a statement in response to North Korea’s April 13 rocket launch attempt. The statement is expected to condemn the launch and call for an expanded blacklist of North Korean firms and individuals. No new sanctions are expected.

“Unless China raises objections overnight, we’ll adopt a presidential Statement on DPRK (North Korea) tomorrow at 10:00 a.m. (1400 GMT),” a Western diplomat told Reuters on Sunday. China, North Korea’s closest ally, has  been urging a softer rebuke of its neighbor in closed door meetings, according to Reuters, but the statement will reflect a unanimous position of the council. The launch attempt is seen as violating the UN’s missile ban on North Korea, instituted following that nation’s 2006 and 2009 nuclear tests.

The Security Council began an emergency session on April 13, just hours after the failed Unha-3 launch. The launch was scheduled to coincide with a celebration of the 100th anniversary of North Korean founder Kim-Il Sung’s birth. The rocket was supposed to carry a remote sensing satellite. It survived just 81 seconds before breaking up in midair and falling into the ocean 165 km from Seoul, South Korea . In an uncharacteristic move, North Korea acknowledged the failure shortly thereafter. “Scientists, technicians and experts are now looking into the cause of the failure,” North Korea’s official Korean Central News Agency said in a report, which was read on state-run television. After North Korea’s prior two launch failures, the state had claimed the attempts were successful.

There is some concern that North Korea will take aggressive action following the failure to compensate for the public embarassment. “Often when they’ve had failures of this kind, they reach into their bag and find other things to do,” said Christopher Hill, a former lead U.S. negotiator at North Korean nuclear program talks. “I would be concerned about the potential of an actual nuclear test coming up.”

The launch was widely seen as a reflection on North Korea’s new leader, Kim Jong Un, who took power at the end of 2011 following his father’s death. 50 invited journalists went to Pyongyang to report on the Unha-3 launch, but were not provided with any video or information at the time of launch. Journalists ended up receiving updates on the launch from international sources. “Now in bizarre situation our NKorea minders asking ME to tell THEM if rocket has launched,” Damian Grammaticas, a BBC News correspondent, wrote in a Twitter message according to a New York Times report. “Went up 4 hours ago but they have no information.”