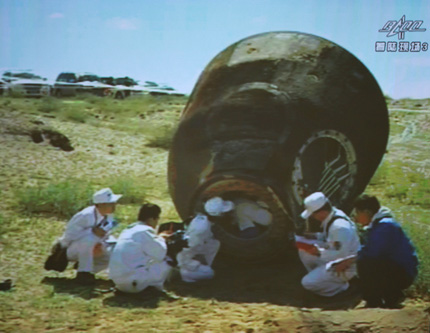 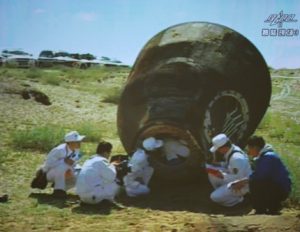 Ground crew help the Shenzhou-9 taikoanuts out of their capsule (Credits: Shanghai Daily).

On June 29, the three member Shenzhou-9 crew landed in inner Mongolia. Other than a ground roll on contact that turned the capsule upside down, the operation went smoothly. The landing wrapped up a highly successful 13 day mission in which the taikonauts docked with and inhabited the Chinese space lab Tiangong-1. All crew members were reported to be in good condition.

The mission was of historical import in many ways. Shenzhou-9 performed both automated and manual rendezvous and docking with Tiangong-1, making China only the third nation to develop such capability. The crew performed experiments aboard the space lab, comprising the first inhabitants of China’s first orbital station.  And its crew included Liu Yang, the first Chinese woman in space.

China’s manned space programmed has developed rapidly since it sent its first taikoanut, Yang Liwei, into space in 2003. China next plans to send another three person crew into space aboard Shenzhou-10 in 2012 or 2013. Although Tiangong-1 is only a prototype for the larger space station China has in the works, its lifetime could be extended based on its current condition. “It has consumed less than one-fourth of its fuel and no back-up systems have been used,” said Shenzhou-9 chief He Yu according to Xinhua. “If Tiangong 1 was in perfect shape, it could work side by side with Tiangong 2, which will be launched in the future.”

Although the Shenzhou spacecraft is largely based on Russia’s Soyuz, China has developed much of its capabilities without international support. The launch of Tiangong-1 followed refusal by the United States to allow China to participate in the International Space Station coalition. China has expressed the hope that as its capabilities expand, the international space community will become more cooperative of necessity. Already, closer ties with European space organizations have been more forthcoming in recent years.

Such collaborations could prove to be fruitful for the established space powers. For instance, taikonauts have been experimenting with Tai Chi in space, a traditional form of physical and mental exercise that could potentially provide benefits beyond or supplemental to the treadmill and cycling routines used aboard ISS. However, significant cross-pollination of the programs remains for the future.

Watch the landing of Shenzhou-9 in the video below: