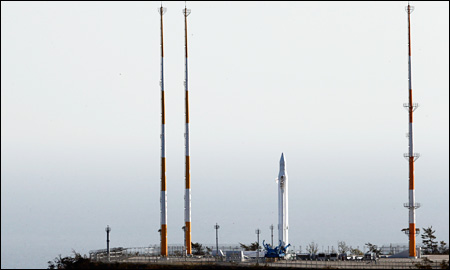 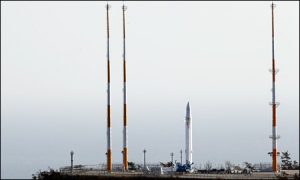 The Korea Space Launch Vehicle-1 was defueled and moved off the launch pad at Naro Space Center after its flight was aborted (Credits: Yonhap).

On November 29, South Korea was scheduled to make its third attempt to put its first satellite in orbit. The launch, which was already postponed from October 26, will likely not take place until the spring of 2013.

“During the countdown we found an electronic signal problem with the thrust vector controller in the second stage and decided a launch will be impossible today,” said Lee Ju-ho, South Korea’s Minister of Education, Science, and Technology.

Korea Space Launch Vehicle-1 (KSLV-1), also known as Naro, is composed of two stages. The first stage is supplied to South Korea by Russia based on their RD-151 kerosene/LOx engine, while the solid rocket second stage, payload fairing, and satellite were developed domestically. The October 26 delay resulted from a faulty Russian part that allowed fuel to leak between the launch pad and first stage. This second delay appears to be due to a faulty controller in the second stage. Replacement parts are readily available locally, but it is unlikely that repairs can be effected before the current launch window closes on December 5. Attempts to correct the problem on the launch pad proved ineffective.
Two prior attempts to loft KSLV-1 in 2009 and 2010 ended in failure  In the 2009 launch attempt, the second stage failed to release the satellite, preventing deployment. In the 2010 launch, the launcher didn’t even reach orbit, exploding two minutes into its flight. Although no official cause of the failures was announced, unspecified changes have since been made to first stage, the second stage flight termination system was eliminated, and the payload fairing electrical system was refined for the third flight.
South Korea may be taking extra precautions on this launch since it could be their last opportunity to fly the KSLV-1. Per their current agreement, Russia is only to provide South Korea with the KSLV-1 first stage for three launches.