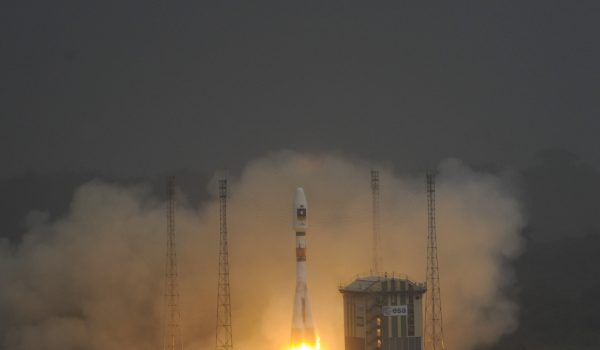 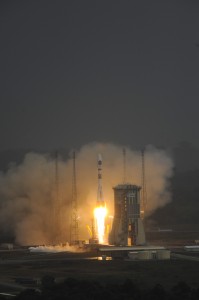 Liftoff of Soyuz VS01 from Kourou (Credits: ESA).

In an historical launch, a Soyuz rocket lifted of from the European spaceport of Kourou, in the French Guiana, on October 21, 2011. This launch represents a double “first” in history: it is the first time that a Soyuz rocket is launched from outside the border of the former Soviet Union (Baikonur in Kazakhstan or Plesetsk in Russia), and it is also the first launch of a spacecraft for the Galileo Global Navigation System (GNSS), the European equivalent to GPS.

The satellites, built by an industry consortium led by EADS Astrium of Germany, are expected to separate from the Fregat-MT upper stage approximately four hours after lift off. The early operations phase will involve orienting the satellites, deploying their solar arrays and gradually activating platform systems.

The Galileo system will comprise 30 satellites, 27 operational plus three spares, placed at an altitude of 23,222 km. By design, Galileo is interoperable with both U.S. GPS and Russian Glonass systems. The next two Galileo IOV satellites will be launched next year.

You can watch a video of the launch from ESA website.