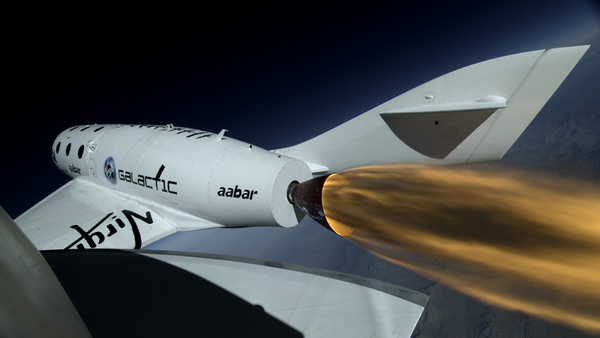 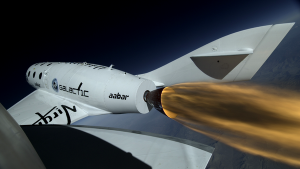 Virgin Galactic’s SpaceShipTwo has successfully broken the sound barrier during the first in a series of powered flights for the suborbital craft.

The spacecraft, built by Scaled Composites took off from Mojave Air and Space Port, carried underneath its mothership, WhiteKnightTwo at 7am local time on April 29th. At 7:50am, after climbing to an altitude of 14 630 meters, SpaceShipTwo separated from the mothership, and ignited its hybrid rocket engine.

Test pilot Mark Stucky and co-pilot Mike Alsbury allowed the engine to fire for 16 seconds, which propelled the spacecraft to Mach 1.22, before disengaging the engine and gliding back to Earth.

“It couldn’t have gone more smoothly,” observed Sir Richard Branson, owner of Virgin Galactic. “Having spaceship and rocket perform together in the air is a long way toward getting into space. A few more test flights with slightly bigger burns every time, and then we’ll all be back here to watch it go into space.”

According to the Scaled Composites test logs webpage, the four test objectives to be achieved during the flight were to successfully perform the first powered flight, and to measure the launch weight expansion, the supersonic aero expansion and the structural expansion. All objectives were met.

SpaceShipTwo is a larger version of its predecessor, SpaceShipOne, which received the $10 million Ansari X-Prize in 2004. The prize was to be awarded to the first company who could launch a spacecraft to over 100 km above the Earth’s surface, and become fully reusable after two weeks. Scaled Composites, which is owned by aviation legend Burt Rutan, won the prize, with the financial assistance of Paul Allen. The X-Prize was modelled on the Orteig Prize, which was awarded to Charles Lindbergh in 1927 for making the first non-stop flight from New York to Paris. That achievement of this feat led to the birth of the trans-Atlantic aviation industry. Similarly, it was hoped by X-Prize founder Peter Diamandis that the X-Prize would lead to a new era in private space flight.

Given the rise in companies offering space tourism flights, and the development of new spacecraft by companies such as XCOR and Blue Origin, it is fair to say that Diamandis was successful in this mission.

Sir Richard Branson had originally intended to begin carrying passengers by 2007, however, an explosion during ground testing and additional qualification flights have delayed the inaugural flight, which Branson now states will occur sometime in 2014.

Below: Separation from the mothership, and ignition!