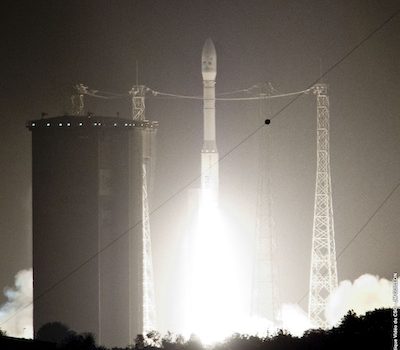 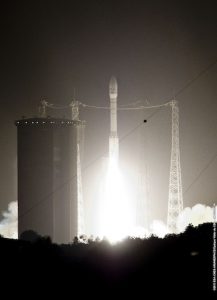 Vega’s liftoff from Kourou on May 7 (Credits: ESA).

The European lightweight launcher Vega has successfully completed its second flight, deploying three satellites into different orbits, on May 6.

“Vega has confirmed that it is ready to deliver a high-quality service for small payloads to low Earth orbit,” said Antonio Fabrizi, European Space Agency’s (ESA) Director of Launchers. “Europe now has the capability to serve both the government and commercial market in this growing market segment.

Vega lifted off at 02:06 GMT from Europe’s Spaceport in Kourou, French Guiana.  The mission required five upper-stage boosts, lasting about twice as long as its maiden flight, in February 2012.  Vega carried three satellites, ESA’s Proba-V, Vietnam’s VNREDSat‑1A, and Estonia’s first satellite, ESTCube-1. Proba-V and VNREDSat-1A are Earth observation satellites while ESTCube-1 is a technology demonstrator designed and built by students from the University of Tartu.  After ESA’s satellite was released into a circular orbit at 820 km, the liquid-propellant Attitude and Vernier Upper Module (AVUM) performed a maneuver to decrease the orbit and the top half of the Vega Secondary Payload Adapter was ejected. VNREDSat-1A was released at 704 km, after the orbit was circularized.  ESTCube‑1 left the dispenser only three minutes later.  At that point, AVUM executed the last burn to reach a trajectory ensuring the safe reentry of the upper stage in compliance with debris mitigation regulations.

The launch was conducted under the Vega Research and Technology Accompaniment (VERTA) program which aims to demonstrate Vega’s flexibility. It marked the start of the transition from ESA to Arianespace as launch operator.  Arianespace has already provided operator service for VNREDSat‑1A, which was Vega’s first commercial payload.  One of VERTA’s goals is to promote the commercial use of the 30-meter-long launcher.

Vega is scheduled to launch the Kazakh DZZ-HR high-resolution remote sensing satellite and the Intermediate eXperimental Vehicle reentry demonstrator in 2014.  LISA Pathfinder and Aeolus, both from ESA, will follow in 2015.

Below, the launch sequence replay (Courtesy of ESA).