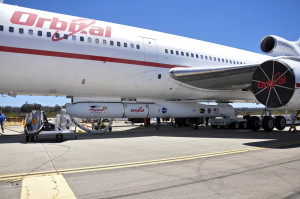 PEGASUS rocket carrying IRIS is attached to the belly of a modified Lockheed L-1011 (Credits: NASA).

NASA’s Interface Region Imaging Spectrograph (IRIS) satellite launched on June 27 from Vandenberg Air Force Base in California at 7:27 local time. The satellite was lofted aboard an Orbital Sciences Pegasus XL rocket that was captive carried to 12.25 km by a modified L-1011 aircraft. It was then released and Pegasus took over, launching the satellite in three stages to its 625 km target altitude.

“IRIS will show the solar chromosphere in more detail than has ever been observed before,” said Adrian Daw, deputy project scientist, before the launch. “My opinion is that we are bound to see something we didn’t expect to see.”

The satellite is scheduled for a two year mission in a Sun-synchronous polar orbit to study the interface region between the Sun’s surface and its corona. This is the area from which ultraviolet emissions, solar flares, and coronal mass ejections are thought to originate and sports a temperature jump from 5,500°C at the surface to 1 million °C in the corona – a leap scientists have so far been unable to explain. 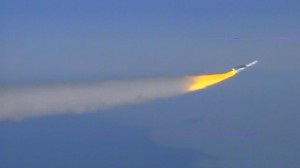 After a 5 second free fall following its release from the carrier aircraft, Pegasus fires up its first stage (Credits: NASA).

“IRIS almost acts as a microscope to SDO’s telescope,” said Jim Hall, mission manager for IRIS, speaking of NASA’s Solar Dynamics Observatory (SDO). “It’s going to look in closely and it’s going to look at that specific region to see how the changes in matter and energy occur in this region. It’s going to collectively bring us a more complete view of the sun.”

After a one day delay due to a power outage in the region that set back ground preparations, IRIS’ launch went off entirely nominally. There was a slight hiccough when a chase plane failed to acquire Pegasus’ signal as it passed over the horizon; as a result, mission control was not receiving telemetry when IRIS separated from its launch vehicle. However, the satellite itself was just fine and began communicating on its own shortly thereafter.

IRIS will undergo a 60 day test period before its mission begins in earnest. IRIS’s launch vehicle may be winding down, however; the satellite was the last scheduled launch for the Pegasus rocket, which specializes in small spacecraft like the 181 kg IRIS. There simply are no suitable spacecraft  slated to launch in the next few years, leaving Pegasus’ future uncertain even as it celebrates a picture-perfect launch.