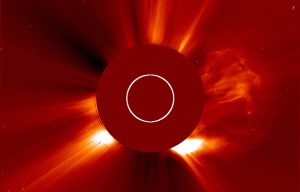 On July 23, the STEREO-A spacecraft recorded a coronal mass ejection (CME) that clocked in between 1800 and 2200 miles per second (2897-3540 km/sec). “Between 1,800 and 2,200 miles per second puts it without question as one of the top five CMEs ever measured by any spacecraft,” says solar scientist Alex Young at NASA’s Goddard Spaceflight Center. “And if it’s at the top of that velocity range it’s probably the fastest.”

STEREO is the first mission to be able to measure CME velocity with any accuracy, so the historical record is limited. Still, events of such speed are labelled “ER” – for extremely rare. “Seeing a CME this fast, really is so unusual,” says Rebecca Evans of the Goddard Space Weather Lab. “And now we have this great chance to study this powerful space weather, to better understand what causes these great explosions, and to improve our models to incorporate what happens during events as rare as these.”

This particular event was not headed for Earth, providing a good opportunity to observe it without experiencing its hazardous effects. Among those effects, generation of a sizable magnetic field at 80 nanoTesla. That is not quite as large as the Carrington Event of 1859 which set fire to telegraph equipment, but substantially larger than the so-called Halloween storms of 2003 that put out power in Sweden and required rerouting of aircraft.

Below is the video captured by STEREO-A as the CME shoots directly at it (looped):

Data from the event can be used to improve forecasting models. Here is a model constructed of the July 23 event, which fortunately was directed away from Earth: