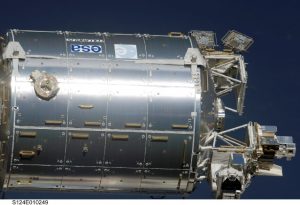 View of the Columbus module showing the External Payload Facility where Solar is located (Credits: NASA).

The International Space Station changed its attitude for a second time to meet Solar facility objective, on June 30. Solar observatory is a payload of the European Space Agency (ESA) located on the External Payload Facility of the Columbus module.

“The European scientists requested that we reposition the station slightly because by having this period of time they could bridge over the two Solar observing visibility windows, allowing them to view the Sun for a full solar rotation without interruption,” said International Space Station Program Scientist Julie Robinson. “The International Space Station Program took a look at the request and was able to change the station’s position to increase science return.”

The space station’s adjustment offers an opportunity to follow an entire solar rotation, which is approximately 27 days. The measurements for this Solar window observation are planned to take place from June 18 to July 23, with the bridging event beginning on July 1. The June viewing window coincides with the Northern Hemisphere summer solstice. During both the summer and winter solstices, the gap between viewing windows is less than 10 days. Therefore, it is possible to bridge two visibility opportunities for a full Sun rotation requiring a minimum adjustment to the station’s attitude angle.

Under nominal conditions, ISS would allow only short visibility windows, between 10 and 12 days at a frequency of about once a month. After this period, the observation is obstructed by station’s structures. The attitude change increases the visibility of the Sun, enabling European scientists to observe a full rotation from a unique orbital perspective.

According to ESA Solar Project Scientist Astrid Orr, the Solar ‘bridging’ measurements will give the possibility to compare Solar data with data from other solar instruments in orbit, such as ESA’s Solar-SOLACES and NASA’s SDO. The bridging will make possible for scientists to develop a method for ‘melding’ sets of data from different instruments into one reference set.

The first time ISS changed its attitude was between December 1 and 11, 2012 when the station’s attitude was temporarily altered by about 7.5 degrees to provide a longer viewing time of the Sun. ESA requested an additional temporary change to the space station’s attitude from November 29 to December 8, 2013. According to ESA scientists, the three visibility windows will provide with a sufficient level of statistics in the measurements.