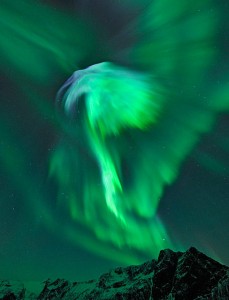 Ionization disturbances from the storm were recorded using radar sounding equipment. The disturbances showed the ionization layers shifting hundreds of kilometers in response to the storm. The storm also produced spectacular auroras around the Arctic Circle. No damage has been reported as a result of the storm.

Another storm, however, is already in progress. Initiated by a near X-class solar flare from a large sunspot on January 23, accelerated protons from the storm have already begun to stream past Earth. The real impact is expected January 24. A X class flare is the most powerful – and dangerous – flare categorization. This most recent flare has been assigned a radiation scale of S3, meaning it could cause isolated reboots of computers on orbiting satellites and could interfere with polar radio communications.

More solar weather events like these can be expected over the next year, with 2012 forecast to be the most active sunspot year in four years, peaking with a solar activity maximum in 2013.