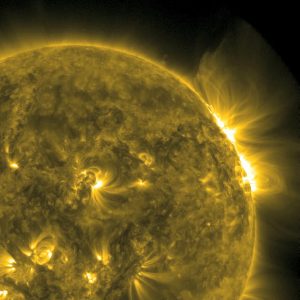 “It’s a great week for Space Weather!” wrote Dean Pesnell, SDO Project Scientist at NASA’s Goddard Space Flight Center in Greenbelt, Md., in a blog update. Expectations are that it will be not just a great week but a great year for space weather, as solar activity levels ramp up to a cyclical 2013 maximum.

An X class solar event can cause significant radiation damage to Earth assets. The January 27 CME, however, was not ejected directly towards the Earth, so the planet received only a “glancing blow,” according to NASA. In addition to the radio blackout, the storm caused airlines to once again reroute flights to avoid passage over the North Pole. The ISS was not in a position that would have placed crew in danger from the storm, always a concern during solar events since ISS orbits outside the protective van Allen radiation belts.  NOAA predicts low level radiation elevation through January 30, after which levels will return to normal.

The January 21 event produced a radiation storm that the Mars Science Laboratory (MSL) was able to measure using its Radiation Assessment Detector (RAD) instrument. MSL is currently en route to Mars, using the RAD to assess radiation levels astronauts could expect to experience on a crewed Mars mission.

The video below shows a compilation of recordings of the January 27 CME from SOHO and SDO solar observatories: