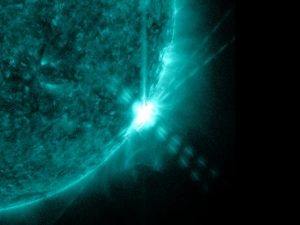 The Solar Dynamics Observatory captured this solar flare on June 7 in the UV range at 131 Angstroms (Credits: NASA).

The 2013 Space Weather Enterprise Forum entitled “Space Weather Impacts: They Happen All the Time,” convened at the headquarters of US National Oceanic and Atmospheric Administration (NOAA)  on June 4 to address our growing vulnerability to space weather events.

Although there was discussion of potential impacts from severe, Carrington-level events – “an outage duration of possibly 16 days to one to two years,” for 40 million US citizens, for instance, as highlighted by acting NOAA Administrator and former astronaut Kathryn Sullivan – forum organizers particularly stressed the need to face even low-level space weather. “Though our need to be vigilant and prepared for the high-impact, low-frequency event is critically important, we must also know how to cope with high-frequency, low-impact events that happen all the time,” said the Forum program.

Sullivan revealed that a space weather event is one of six White House national emergency preparedness events being planned for the upcoming year, a sign that the hazards of space weather impacts are slowly gaining general recognition. “Our dependence on sophisticated electronics technology for almost everything we do today has introduced a new vulnerability into our societies,” Sullivan pointed out. 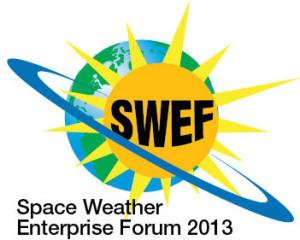 It’s not just scientists and spacecraft operators interested in addressing these problems anymore. One speaker representing Delta Airlines spoke to the impacts their company already feels from geomagnetic activity; they already spend thousands of extra dollars every time they must reroute a flight to avoid possible communications outages in key regions, particularly at high latitudes.

The need to derive better models for forecasting space weather and its impacts has resulted in ever increasing space missions geared to watching the Sun. These are some of the more recent and commonly referenced missions, although the list of solar-studying missions numbers in the hundreds.

Solar Heliophysics Observatory (SOHO) launched in 1995 in a collaboration between the European Space Agency and NASA to study the inner structure of the Sun and the origin of solar wind. It is positioned in the Sun-Earth first Lagrangian point, so it always sees the Earth-facing side of the Sun.

Hinode is a JAXA-led mission that launched in 2006. It orbits Earth sun-synchronously and studies the Sun’s magnetic fields in a quest to identify what instigates solar eruptions.

Solar Terrestrial Relations Observatory (STEREO) A and B launched in 2006 by NASA is a pair of satellites that travel in Earth’s orbit about the Sun – one in front of, and one behind the planet. These spacecraft are used to produce three dimensional images of coronal mass ejections.

Solar Dynamics Observatory (SDO) was launched by NASA in 2010 and it the most comprehensive solar observatory to-date. SDO covers many wavelengths and looks for any variations in the observable Sun that can explain its changes and eruptions.

The Radiation Storm Belt Probes (RSBP) are not solar observing, but rather focus on the Sun’s direct impact on Earth’s Van Allen belts that product us from solar events. RSBP consists of two satellites that orbit Earth, passing through and across the Van Allen belts. It is a difficult orbit, one usually avoided by spacecraft operators to protect their electronics from radiation damage. RSBP studies energetic particles and magnetic field behaviour.

With all of these missions, scientists are only just beginning to scratch the surface of understanding what instigates Solar events and what they mean for Earth. The science of forecasting such events is still very much a work in progress.