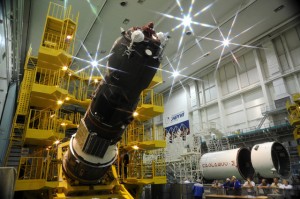 According to Roskomos head Vladimir Popovkin, an inspection of the Soyuz production line revealed that the accident was not a consequence of a production fault. During a hearing to the parliament, Popovkin said that the failure that lead to the loss of the Progress M12-M unmanned cargo spacecraft was an isolated problem. “We tested all the engines so we can say that the clogged pipe that brought down the Progress is an isolated incident,” he said. Popovkin said also that the four accidents that plagued the Russian space agency in the past year showed the need to create an independent agency to run quality controls at the Baikonur launchpad in Kazakhstan. Regarding the fact that Russia is currently the only provider of crew launches, Popovkin commented: “while other countries are working on new (spacecraft) we are forced to focus on the production of well-reputed but comparatively old spacecrafts Soyuz and Progress.”

Roscosmos has recently been forced to stop the development of Rus-M carrier rocket, which was expected to make its first flight in 2015 from the new Vostochny spaceport in Russia: “We have come to the conclusion that we do not need a new rocket,” said Popovkin, “we can continue using those we already have.”

In the video, below, docking of a Progress spacecraft to the ISS.