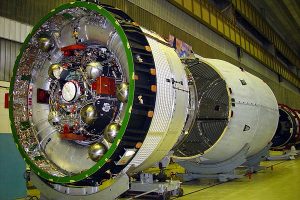 In the foreground, the Breeze-M stage is comprised of a central propellant tank together with its main propulsion system and an auxiliary donut-shaped propellant tank (Credits: Khrunichev).

October 25 Update: The Breeze-M that malfunctioned on August 6 has now exploded in space, creating a debris cloud.

Shortly after publication of this article, reports surfaced indicating that explosive deconstruction of the Breeze-M upper stage had occurred on October 16. The occurence was not surprising considering the large quantity of hypergolic propellant still aboard the vessel – more than half of its 19.8 ton tankful. 500 pieces of debris are being tracked, but experts believe that there are many more debris objects than have been catalogued so far. The debris cloud is not expected to pose an immediate threat to the International Space Station, but the residual debris objects in the crowded low Earth orbit will likely challenge satellites and spacefarers for years to come.

On the 6th of August 2012, a Proton Breeze-M stage shut-down shortly after the start of the third of its four planned maneuvers, resulting in a launch failure and in the loss of the two spacecraft it was carrying, Telkom 3 and Express MD2. Like its predecessors in February 2006, in March 2008, and in August 2011, the Proton Breeze-M was left tumbling in an elliptical orbit where debris from a future explosion could pose a serious threat to spacecraft already orbiting there.

The Breeze-M stage has a diameter of 4 meters and a length of 2.65 meters. It is comprised of a central propellant tank together with the main propulsion system and an auxiliary toric-shaped propellant tank (APT). In the 6 August accident, the APT did not separate like it should have after few burns, leaving more than 5 metric tons of propellant in orbit. Concern about a future explosion of the Russian stage is based upon the breakups of two Breeze-M stages (one in 2007 and one in 2010) that suffered exactly the same mishap. A third Breeze-M stage suffered an on-orbit malfunction in August 2011, but has not exploded yet.

In addition to the stages themselves, the disposition of the spacecraft must be addressed. The 2006 and 2011 missions each carried a single spacecraft (Arabsat 4A and Express AM4, respectively) which were sent on controlled and destructive reentries over the Pacific Ocean, thus eliminating the risk of a future collision as well as the risk of a debris-producing explosion. In the case of the 2008 failure, the spacecraft (AMC 14) had sufficient propellant reserves to raise itself and enter a useful geosynchronous orbit. No decision concerning Telkom 3 and Express MD2 has been taken yet.

Another variant of the Breeze-M, called Rokot Breeze-KM has also encountered two failures since 2005. The first mishap prevented the European Cryosat from even entering an Earth orbit. The second one, in 2011, stranded the Russian geodetic satellite GEO-IK 2 in an undesired elliptical orbit because of a stage failure. The amount of propellants remaining in this stage might someday trigger an explosion.

Watch a report of the 6 August failure on the Russian news below: