The 64th International Astronautical Congress (IAC) closed two weeks ago and it is now time to summarize what happened at the China National Convention Center of Beijing, in the heart of the Olympic park.

The opening day, between a Chinese traditional show and a Tai Chi performance, saw one of the most anticipated panels of the entire conference with the heads of the most important international space agencies: NASA, the European Space Agency (ESA), the Russian Federal Space Agency (Roscosmos), the Japan Aerospace Exploration Agency (JAXA), and the China National Space Administration (CNSA). However, the expectations were partly disappointed since the heads used the stage only to remark on past achievements and their agencies’ well-known long term plans. Charles Bolden, NASA Administrator, proudly reminded everyone of the timeline that will lead to the capture of an asteroid and the success of the commercial space program. Chen Qiufa, CNSA Administrator, highlighted the recent achievements of the Chinese human space program, adding that China has no intention to participate in the International Space Station but will be happy to welcome foreign astronauts on the future Chinese outpost in low Earth orbit, planned for around 2020. Cooperation was the key word on the panel. Hard to say if it was just political prudence or true intention, but the impression was that NASA, without addressing the matter directly, was trying to invite China into a broader collaboration.

When the topic switched to space debris, the tone of the answers suddenly changed. Although recognizing the existence of the issue, clearly neither NASA nor Roscosmos nor the other agencies are ready to take the lead on this problem. Only the intervention of ESA’s Director General Jean-Jaques Dordain, who proudly mentioned the CleanSpace initiative, saved the panel from a bit of embarrassment due to not having any credible plans to face this serious issue.

Later in the week, Secure World Foundation (SWF) and École Polytechnique Fédérale de Lausanne (EPFL) organized and sponsored, respectively, a dedicated panel on space debris. The panel, composed of Muriel Richard (EPFL), Tanya Masson-Zwaan (International Institute of Space Law), Zhuyan Li (Space Generation Advisory Council), Tetuso Yasaka (QPS institute), Heiner Klingrad (ESA), and Brian Weeden (SWF) extensively discussed the threats of space junk and the challenges in mitigating them. Special attention was given to the rising issue of nanosatellites launched beyond 600 km, making them unable to reenter the atmosphere within the 25 year debris-control guideline. Klingrad took a strong position stating that these small satellites, without any means of propulsion or control, must not be launched to an altitude where they cannot reenter in 25 years. Moreover, Masson-Zwaan, while explaining the current legal and political framework, said that the solution cannot be found in international treaties but instead in the action of countries accepting the recommendations that have already been put in place in their own legal code, as Austria has already done. The panel was also the occasion to present once again the CleanSpace One project, celebrating its deal signed with Swiss Space System guaranteeing a launch to deorbit a nanosatellite.

Richard explained that their development of CleanSpace One in the first place originated when EPFL’s SwissCube came very close to another debris object, escaping collision by a few meters. On that occasion, they realized that they should have done something to deorbit their SwissCube within 25 years of its end of life. 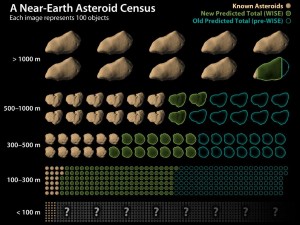 The Congress was also the place to discuss Near Earth Objects (NEOs) and an effective communication plan to inform both the public and decision makers of potential scenarios related to an imminent threat from a space rock.

“Tragedy in one place does not stay there, because the world is interconnected, therefore a NEO plan must be international,” contributed Scott Hubbard from the B612 Foundation.

Talking about communication, the launch of the new Chinese rocket was barely noticed by the IAC participants behind the “Great Firewall of China”.  What is more surprising is that the neither the CASCA representatives at IAC were informed about the new rocket and they saw the launch on the national television like everyone else in China. 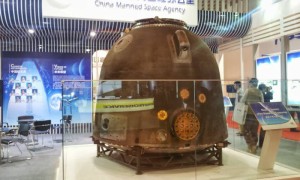 The exhibition was clearly weakened by the absence of major actors, like NASA, ESA, Roscosmos and SpaceX. The Chinese companies took the opportunity to show their expertise, taking over one fourth of the exhibition space, and even bringing in the actual Shenzou capsule flown by the most recent taikonaut crew. Apart from the Chinese delegation, the stage was taken mainly by those national agencies who are often eclipsed by their bigger cousins: DLR, CNES, Italian Space Agency (ASI), Korea Aerospace Research Institute, and South African National Space Agency (SANSA). ASI and SANSA accommodated in their booth also part of their respective national industries in order to provide opportunities for cutting new deals with the fast-developing China. The Italian delegation also used the stage to show the successes of the Italian space industry like the Cosmo-SkyMed constellation, an Earth observation satellite system intended for both military and civilian use, the Vega launcher, ExoMars drill, and the IXV lifting body developed at the Italian Aerospace Research Center. According to Fabrizio Tuzi, Director General of ASI:

“The Italian Space Agency is focusing on three activities which are the second generation of Cosmo-Skymed satellites, OPSIS (OPtical System for Imaging and Surveillance) and SIGMA, which will increase Ka-band communication capabilities.”

Tuzi also said that ASI is working in cooperation with the Italian Defense minister on the space debris topic and the agency will be present at the Space Situational Awareness 2013 in London. Most probably, it will be also creating a dedicated group focused on debris and reentry issues.