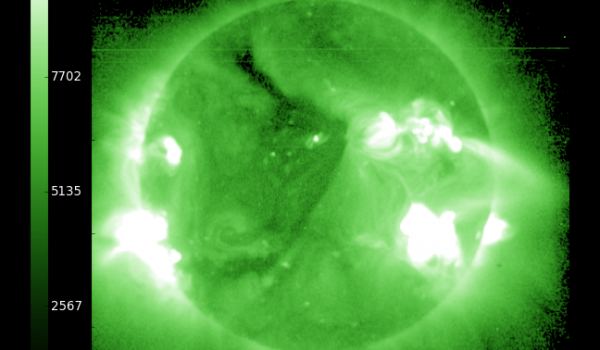 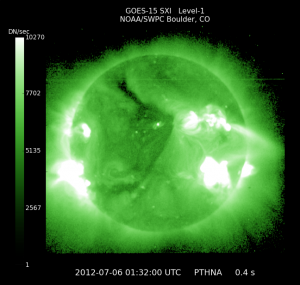 Sunspot AR1515 spans more than 100,000 km of the sun’s surface and has spewed forth 12 M-class solar flares between July 3 and July 5. A July 5 flare resulted in a moderate (R2) radio blackout, audible as static on tuned receivers.

Click to hear the sound of the July 5 CME as recorded by amateur radio astronomer Thomas Ashcraft of New Mexico at 21 MHz (Credits: SpaceWeather.com).

So far, the flares have had minimal impact on Earth assets due to the south-facing direction of the originating sunspot. However, the spot is beginning to rotate in Earth’s direction, causing scientists to keep a close watch on the hyperactive region.  “Stay tuned for updates as Region 1515 continues its march across the solar disk,” officials at the Space Weather Prediction Center, a joint service of NOAA and the National Weather Service, wrote in an update. The US National Oceanic and Atmospheric Administration (NOAA) predicts an 80% chance of further M-class flares and a 10% chance of X-class, the most severe classification of solar flare, within the next 24 hours.

One of four coronal mass ejections being tracked from July 4 emissions is expected to intersect Earth on July 7th. The other three are off-ecliptic and unlikely to significantly impact Earth. Two will brush past the planet on July 8th, potentially producing minor G1 geomagnetic storms.

Here, the Solar Dynamic Observatory’s recording of an eruption from AR1515 on July 4: