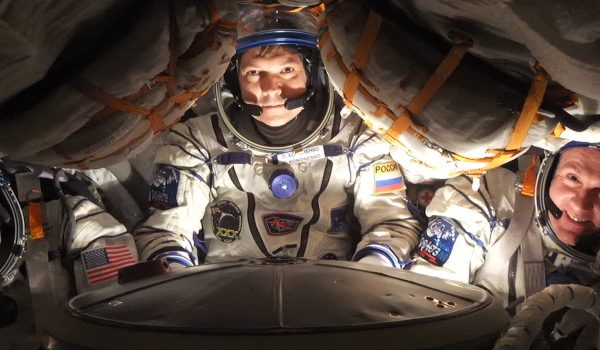 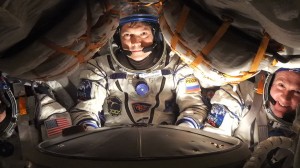 The first fit check of Soyuz TMA-03M spacecraft, equipment and spacesuit on 9 December 2011. Oleg Kononenko is in the middle, André Kuipers on the right and Don Pettit on the left. (Credits: ESA).

After their launch from Baikonur Cosmodrome in Kazakhstan at 13:16 GMT (14:16 CET) today, ESA astronaut André Kuipers and crewmates Oleg Kononenko and Don Pettit are circling Earth every 90 minutes aboard the Soyuz TMA-3M spacecraft as they make their way to the International Space Station.

During the next two days, the spacecraft will circle the globe 35 times, performing three major engine burns as its orbit is adjusted for docking with the International Space Station (ISS) on Friday, 23 December at 13:43 GMT (14:43 CET). With their arrival, the Space Station will resume full operations – the occupancy has been reduced to three for about three months as a result of the Progress cargo vessel launch mishap in August.

During his PromISSe mission – Programme for Research in Orbit Maximising the Inspiration from the Space Station for Europe – André will be part of Expeditions 30 and 31.  As a flight engineer, he will be the prime crewmember responsible for the rendezvous and docking operations of ESA’s third Automated Transfer Vehicle, ATV-3. ATV is the largest servicing vehicle for the Station in operation today.

More than 25 European experiments will be carried out during André’s mission, covering a range of disciplines: human research, fluid physics, materials science, radiation research, biology and technology. In addition, André will conduct about 20 experiments for NASA and JAXA, the US and Japanese space agencies. During his mission, André will have his eyes on our planet, sharing some of the unique views of Earth from the Station’s Cupola window module. He will invite children to become involved in a wide range of educational activities about life, biodiversity and the effects of climate change on Earth.

Science demonstrations will be beamed from orbit to classrooms across Europe, with experiments on convection and creating foams in weightlessness. André will also be an advocate for health and human wellbeing by encouraging children to stay fit by following the second international education initiative of ‘Mission-X: Train Like an Astronaut’. The ESA astronaut will remain in space for about five months as part of the Station’s permanent, international six-astronaut crew. He will land back on Earth after 148 days next May.