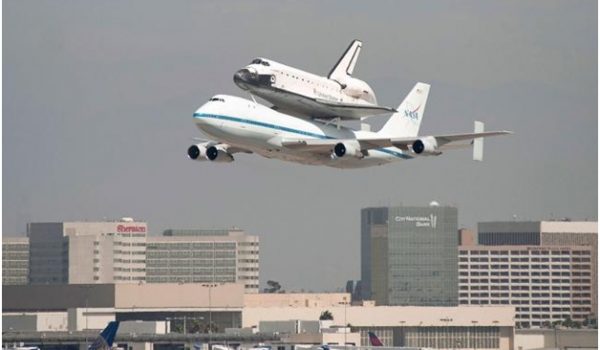 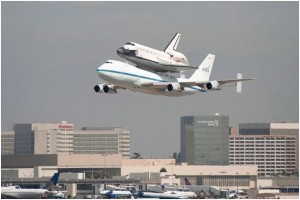 The space shuttle Endeavour, piggybacked atop of NASA’s Shuttle Carrier Aircraft, flies over the Los Angeles International Airport on Sept. 21, 2012. Endeavour will be placed on display at the California Science Center (Credits: Getty Images/Michal Czerwonka)

The legislation limits the liability of space flight companies that comply with its provisions.

“California aerospace pioneers like Virgin Galactic, SpaceX and the Spaceship Company are blazing a path to the stars with commercial space travel,” Brown said in a statement. “This bill allows commercial space-travel companies to innovate and explore without the worry of excessive liability.”

A broad-brush overview of Assembly Bill 2243 shows that companies providing space flight activities are required to have each participant sign a “prescribed warning statement” in order to invoke immunity privileges for bodily injuries or damages sustained by a spaceflight participant as a result of risk and danger inherent in space tourism.

The aim is to create a business climate that is conducive to commercial space flight.

“California has long been known as a place that breaks down barriers and fosters innovation — from social movements like environmentalism to the start-up culture of Silicon Valley,” Virgin Group founder Richard Branson said in a statement released by Brown’s office. “The teams at Virgin Galactic and The Spaceship Company are forging entirely new paths in travel, science and exploration, and this legislation will ensure that California continues to be a place that looks forward – and not back.”

Branson referred to the legislation as an incentive to the teams at Virgin Galactic and The Spaceship Co. at the Mojave Air and Space Port — where both companies are constructing and testing launch vehicles for space tourism and scientific research flights into suborbital orbit.

The signing of the Bill comes after decades of declining human space flight industry in California that has lost many of its companies to competing states including Alabama, Colorado, Florida, New Mexico, and Texas.  With the signing of the bill, California joins three states that have legislation that limits liability for space-flight companies – Florida, Texas, and Virginia. New Mexico and Colorado are working on similar legislation.