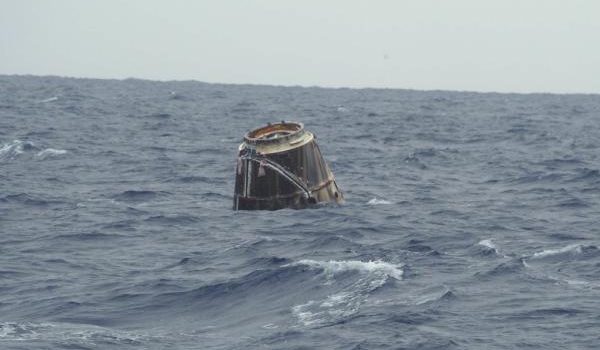 Dragon floating in the Pacific Ocean after a successful splash down (Credits: SpaceX).

At 8:42 AM PST, SpaceX’s Dragon capsule splashed down off the coast of Baja California, Mexico. It has completed its historic mission as the first commercial craft to dock with the International Space Station.

“I think it really shows that commercial spaceflight can be successful,” said Elon Musk, CEO, Chief Designer, and founder of SpaceX. “This mission worked for the first time right out of the gate. It was done, obviously, in close partnership with NASA, but in a different way, and it shows that that different way works and we should reinforce that.”

Seven and a half hours earlier, Dragon underwent a robotic inspection by Dextre – the Special Purpose Dextrous Manipulator – a test procedure for the time when Dragon will carry cargo to be deployed outside by the robot. Then astronaut Don Pettit used Canadarm 2 to detach and release the capsule. Once free of the station, Dragon used its thrusters to back away. It reentered the atmosphere where its reusable ablative heat shield worked perfectly before deploying three parachutes and drifting down into the ocean right on target. The capsule is being collected by a SpaceX barge that had been standing by for that purpose.

SpaceX and NASA crew monitored the conclusion of the spacecraft’s mission, anxious that nothing should go wrong to spoil an otherwise perfect test run. Pettit, who was also responsible for grappling Dragon on May 25, urged Capcom in Houston for updates, while Musk, who was recorded during the proceedings compulsively drinking coffee at SpaceX mission control, reported being overwhelmed with joy at the mission’s conclusion. “The point at which the main parachutes opened and all three were working and Dragon was descending normally, that’s the point at which I really felt relieved and knew that the mission was likely to be 100 percent successful.”

The next Dragon flight, this time on a resupply mission, could take place as early as September.

Watch NASA’s coverage of the splashdown below: