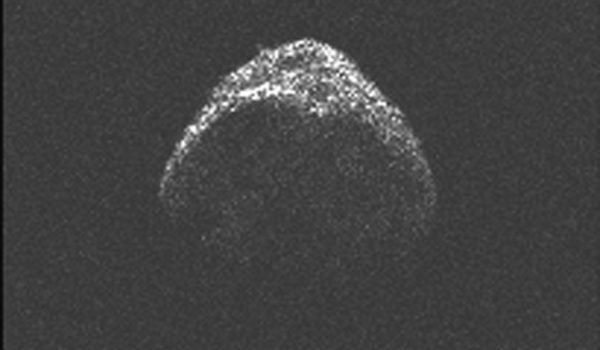 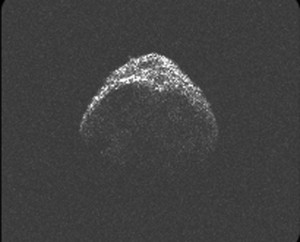 Asteroid 2012 LZ1 as photographed by the Arecibo Observatory (Credits: Arecibo).

Asteroid 2012 LZ1 was discovered on June 10, 2012 and classified as potentially hazardous since its orbit comes within the prescribed 20 lunar distances of Earth. New observations from the Arecibo observatory have found that, although the asteroid is twice as large as originally thought, it is not likely to pose a collision hazard within the next 750 years.

“This object turned out to be quite a bit bigger than we expected, which shows how important radar observations can be,” commented Dr. Ellen Howell of Arecibo. She added: “We’re still learning a lot about the population of asteroids.”

The latest observations showed 2012 LZ1 to be about 1 kilometer in diameter. It was initially thought to be much smaller because its surface is quite dark, reflecting only 2-4% of incident light.

The asteroid made its closest approach just four days after its discovery, on June 14. It passed 14 lunar distances from Earth or 5.3 million kilometers – close enough to be considered potentially hazardous and warrant monitoring but not close enough to pose imminent danger. In fact, NASA’s Asteroid Watch seemed confused by the media attention, tweeting: “A bit stumped over the hype surrounding asteroid 2012 LZ1 today. Huge? No; Close? Not really (3.4 million miles); A danger? No.”

Although there was no danger this time around, the late discovery of so close an asteroid and the gross underestimate of its size shows just how far there is to go in establishing robust near Earth object protection. Most asteroid deflection techniques currently under development require much longer than a few days to be effective.

Below, a time lapse video of the asteroid’s closest approach. The video spans 1.7 hours and the several powerlines and satellites cross the field of view during that time (Credits: messierhunter).