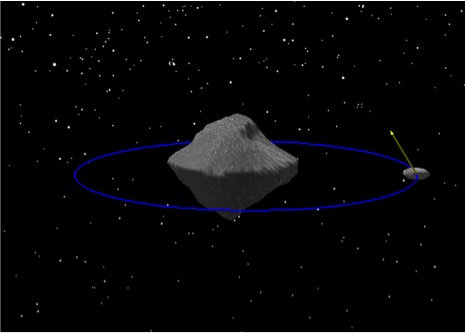 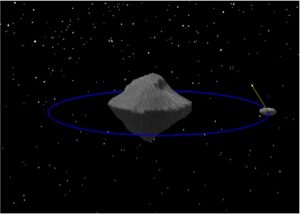 After 2 years of work, the joint European and U.S Asteroid Impact and Deflection Assessment (AIDA) mission has now officially identified asteroid Didymos as its target.  “The project has value in many areas,” says Andy Cheng, AIDA lead at Johns Hopkins University, “from applied science and exploration to asteroid resource utilization.”

According to the European Space Agency (ESA), AIDA will intercept Didymos in 2022 when it will make the closest approach to Earth, at 11 million kilometers.  Didymos, which is Greek for “twins“, is a binary system, which is a complex system involving 2 bodies orbiting each other.  The larger body is roughly 800 meters wide, while the smaller space rock is about 150 meters wide.

The AIDA mission will be composed of 2 spacecraft, the U.S Double Asteroid Redirection Test (DART), which is designed to collide with the asteroid, and ESA’s Asteroid Impact Monitor (AIM). After intercepting the asteroid on its path through the solar system, the DART probe will smash into the smaller body at about 6.25 km/s, changing the rate at which the objects spin around each other.  AIM would carry out a detailed science survey of Didymos both before and after the collision.  Meanwhile, Earth-based scientists would perform “ground-truthing” observations, which involves comparing known data of the asteroid with new information gained from the mission, in order to confirm the validity of the information previously gathered.

The mission’s goal is to learn more about how to deflect a potentially dangerous asteroid from its course towards Earth.  However, since the impact would unleash energy similar to when space debris hits a satellite, the mission is also intended to improve models of space-debris collisions.

ESA’s AIDA is not the only mission concept designed to learn more about asteroids.  NASA has also approved the Osiris-REx asteroid sample return mission.  The spacecraft will improve our basic knowledge about the composition of asteroids and will hopefully provide precious information on asteroid deflection and planetary defense strategies.