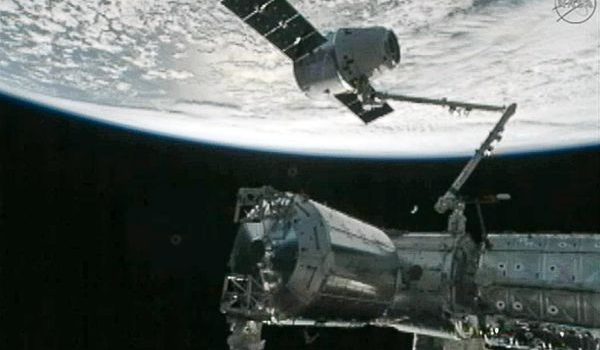 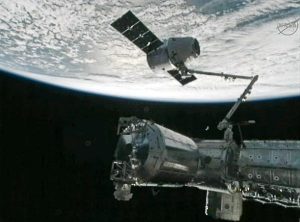 SpaceX’s Dragon cargo capsule has successfully berthed with the International Space Station (ISS) after leaving from Cape Canaveral, on March 1.  It was the first Falcon 9 launch after an anomaly occurred during launch in October 2012.

Friday’s launch and planned rendezvous has not been without incident however; the unmanned Dragon successfully delivered 555 kilograms of food supplies and scientific experiments to the station on 3rd March, one day behind schedule, after several anomalies prevented the capsule from making its rendezvous with the station.  Firstly, there was an issue which prevented the solar arrays from deploying, and then it was revealed that 3 of the 4 thrusters were experiencing a glitch, possibly stemming from frozen helium causing a blockage preventing the thrusters from firing.  It seems that the blockage had gradually thawed, and all functionality was eventually restored.  The capsule’s orbit was eventually raised, allowing ISS to capture Dragon with the Canadarm at 5:31am Eastern Time, with the full berthing procedure being completed at 8:56am ET.

This flight was the second cargo mission to the station contracted  by SpaceX for NASA  and the third visit in total to ISS.  SpaceX has signed an agreement with NASA to perform 12 missions, to occur between 2012 and 2015.  Dragon arrived at the space station for the 1st time on May 2012 and then carried out the 1st resupply mission in the following October.  On that occasion, Falcon 9, the rocket carrier, had a fault in one of its nine engines. The remaining motors were able to compensate, delivering the Dragon spacecraft to ISS.  However, a small Orbcomm satellite failed to be reach the correct orbit as a result of the shutdown.  Although a joint investigation into Falcon 9’s rocket engine malfunction was still open, NASA had cleared the rocket for the launch on 1st March.

Below: Dragon arrives at ISS on March 3rd