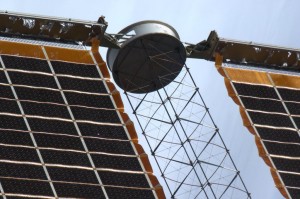 International Space Station commander Chris Hadfield has posted an image to his Twitter account, showing a small hole in one of the station’s solar panels.

The image was posted on 29th April, and was accompanied by the following brief synopsis:

“Bullet hole – a small stone from the universe went through our solar array. Glad it missed the hull.”

Lucky indeed, although spaceship hulls are given some protection from such events, namely in the form of a layered skin, which contains different fillings within the layers. The ISS contains over 200 types of shielding, varying in thickness and material type and are strategically placed over critical areas.

Early spacecraft shields were known as “monolithic shields” and consisted of a solid, thick piece of aluminium to absorb the impact. These naturally carried a heavy mass penalty, and were discontinued as shield designs became more advanced.

One type of shield common on the ISS is the Whipple Shield, which was designed by Fred Whipple, an American astronomer who first suggested the idea in 1946. A Whipple Shield is made of different layers of material, which are separated by a gap allowing the debris particle to break up on contact with the outer aluminium layer, and dissipate over a wider area before striking the secondary layer, which in basic shields, is the spacecraft hull itself. More advanced Whipple Shields contain multiple layers of materials such as Nextel and Kevlar, which serve to slow the shattered meteorite debris even further, and reduce the amount of impulse transferred into the hull. 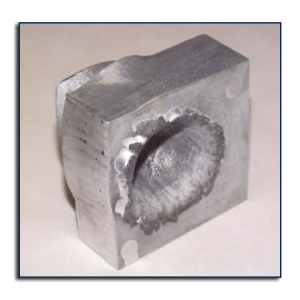 Most micrometeoroids impact at a velocity in excess of 11 kilometers per second, and simulating these velocities for testing shields on Earth can be a challenging task in itself.

Engineers from Johnson Space Center use a lab at White Sands Test Facility for testing hypervelocity impacts. JSC’s Hypervelocity Impact Technology Facility (HITF) design shields to be used on ISS and other spacecraft and send the test items to the Hypervelocity Group at White Sands, to be tested for flight certification.

Traditional powder projectiles, such as those found in firearms, generally can’t reach the hypervelocities achieved by micrometeoroids. For velocities of over 7 kilometers per second, NASA uses a Light Gas Gun, which is a 2 stage system comprising of a powder based first stage, and a compressed hydrogen second stage. The projectile is fired down the long barrel into the test subject, and high speed cameras record the effects of the particle on the shielding.

NASA is currently developing more advanced shields for use on Mars and other deep space missions. Basic Whipple Shields are unsuitable for deep space, due to the extreme velocities experienced further into the solar system.  Some velocities in our solar system are estimated to be in the region of 70 km/sec, while fragments from deep space debris have been estimated to be travelling at an order of magnitude of 240 km/sec.

Critical areas of spacecraft, and the appropriate shielding to use, are decided by the probability of impact and by the geometry and size of the potential target area. Although the solar arrays on ISS were not badly damaged, given the 3567 square meter area of the arrays, it is perhaps lucky that these collisions are not more frequent.