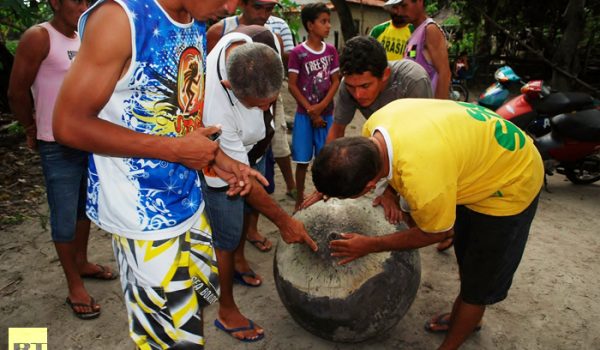 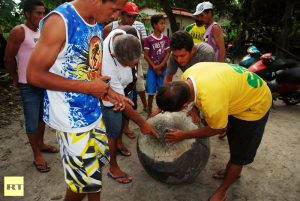 Thousands of locals are flocking to the Brazilian village of Riacho dos Poços to see a large metal object that reportedly fell from the sky. Although no one was injured, the object narrowly missed the home where Valdir José Mendes was sleeping, severing a cashew tree and embedding itself in the ground a few meters away. The roughly 1m spherical object is metallic, approximately 50kg, and according to eyewitnesses, appears to have some liquid sloshing inside.

“I heard the noise and I went out to see what caused it. I thought it was a plane that had fallen, or an earthquake,” said Mendes. Instead he found a 1-meter diameter crater with the object inside, and with the help 20 other villagers, managed to pull it out. “It was a huge uproar here. Some feared it was the beginning of the 2012 end of the world, others said it was ‘alien’, but I think it is a piece of satellite,” said Max Garreto Mauro, 25, a resident of the nearby town of Mata Roma.

Military police have since confiscated the sphere and taken it to the barracks in Mata Roma. Brazil’s Air Force Command has refrained from speculating as to the origin of the sphere, saying that the barracks lacks the specialized equipment required to identify the sphere and provide an opinion. 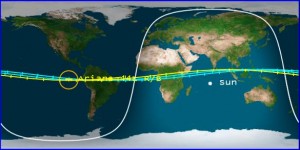 The 1997 016C object was over the Pacific Ocean at its expected time of reentry; however, it could have landed anywhere along the yellow/teal ground track (Credits: Aerospace Corporation).

However, a source at the University of Sao Carlos has speculated that the object could be a helium coolant tank from an Ariane 4 rocket body that was predicted to occur the morning the object landed. According to the Aerospace Corporation, object 1997 016C, an Ariane 4 3rd-stage rocket body was expected to reenter just off the coast of South America and reenter into the Pacific Ocean; however, the object could reasonably have landed anywhere along the teal and yellow ground track shown in the image to the left.

In December 2011, a similar (albeit smaller) spherical object fell from the sky and landed in Namibia. Russian experts have reported that the 35cm Namibia sphere was part of a Soyuz-U rocket launched in late October 2011.

The amateur video below contains shows locals inspecting the as yet-unidentified object.