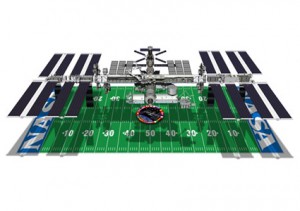 ISS is equivalent in size to an American football field (Credits: NASA).

Over the period August 6-17, NASA will host a technical exchange workshop to discuss options for end of life procedures for the International Space Station. The station is currently scheduled to be decommissioned in 2020.

The workshop will be looking at ways to destructively reenter the spacecraft into Earth’s atmosphere. The concern with such a large, durable structure is that too much of the station would survive reentry, posing hazards to Earth ecosystems and populations. ISS is the largest  spacecraft ever to attempt such a feat. It’s closest analog is the Mir space station, which deorbited in 2001 with a mass of 130 tons. ISS, on the other hand, is expected to have a final mass of 420 tons. The ISS partners plan to study the lessons of Mir’s reentry, which resulted in a debris footprint of 6000 km, while devising the approach to deorbiting ISS.

There are other options for ISS post-2020 than atmospheric reentry, of course. Suggestions have included moving the station into a lunar orbit to improve access to the Moon. Others have suggested converting ISS into a commercial facility for either continued research or tourist experiences. Even more audaciously, a proposal earlier this year suggested that ISS could be outfitted to travel to asteroids in deep space, equipped with a propulsion system and improved insulation. The simplest alternative might be to extend ISS operations under the current partnership.

Should the station ultimately be deorbited, careful planning will be needed to do so safely. With 8 years or more of operations left, NASA and its partners have plenty of time to make sure it’s done right.

Below, see a rendering of Mir’s reentry followed by views of the debris that survived reentry shooting across the sky before landing in the Pacific Ocean: