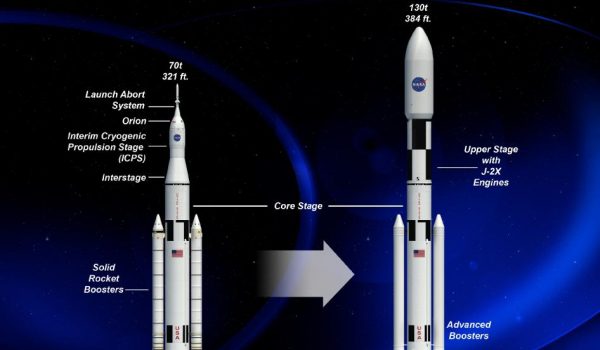 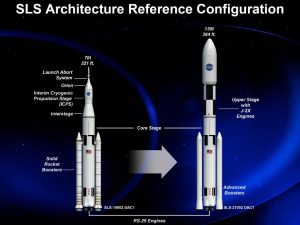 The various configurations of SLS are designed to achieve a system that can be used for anything from low Earth orbit cargo runs to deep space manned missions (Credits: NASA).

NASA’s Space Launch System (SLS) is intended to launch the new Orion capsule, putting NASA back in the business of launching humans to space. On July 25, SLS passed a combined System Requirements and System Definition Review.

“The in-depth assessment confirmed the basic vehicle concepts of the SLS, allowing the team to move forward and start more detailed engineering design,” said William Gerstenmaier, associate administrator for the Human Exploration and Operations Mission Directorate at NASA Headquarters. The review also confirmed integration of SLS with the Orion capsule.

The SLS program is attempting to move quickly through NASA procedures to fill in the gap left by the discontinued Space Shuttle. The United States has not had the capability to launch humans into space since 2011.  “This has been a whirlwind experience from a design standpoint. Reaching this key development point in such a short period of time, while following the strict protocol and design standards set by NASA for human spaceflight is a testament to the team’s commitment to delivering the nation’s next heavy-lift launch vehicle,” said SLS Program Manager Todd May. It took SLS 10 months to pass the double review – a streamlined process that is new to NASA.

SLS is scheduled to first test launch in 2017. The initial configuration will have a 70 ton capcity but an evolved three stage configuration is planned, providing 130 tons of lift. SLS will use the J-2X upper stage rocket engine under development by Pratt & Whitney Rocketdyne. The core stage is being built by Boeing.

“This new heavy-lift launch vehicle will make it possible for explorers to reach beyond our current limits, to nearby asteroids, Mars and its moons, and to destinations even farther across our solar system,” said Gerstenmaier. Those explorers will travel on the Orion capsule, a preliminary shell of which was delivered to NASA’s Kennedy Space Flight Center in early July. It will be used in the first unmanned flight test, now scheduled for 2014. SLS will not be ready in time for that flight, so Orion will initially launched aboard a Delta IV Heavy rocket.

Below, a promotional video NASA published on SLS in early 2012: