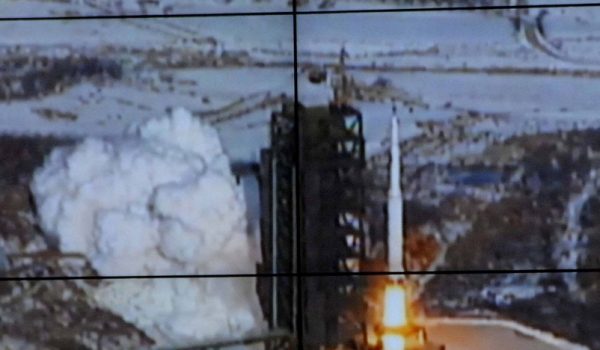 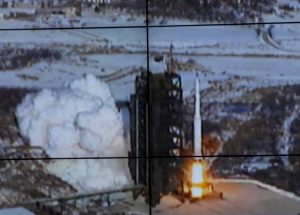 On December 12, North Korea took the world by surprise when it successfully launched a rocket it had failed to launch several times before. The launch of Unha-3 put a satellite in orbit that North Korea says is for weather obervation and that no external nation has been able to puzzle out. South Korea’s Defense Department has indicated that the satellite appears to be orbiting nominally at 7.6 km/s. Information given to NBC News from an anonymous US source indicated that US officials thought the satellite to be tumbling out of control and likely to reenter the atmosphere, but no one has stepped forward to substantiate such a claim. It might be safer for everyone involved if the satellite did deorbit – with no attitude control, the satellite could precipitate an on-orbit collision, while its slight mass is unlikely to pose much of a reentry hazard.

The UN Security Council has condemned the launch as a clear violation of UN resolutions intended to prevent North Korea from achieving intercontinental ballistic missile capabilities. North Koreans themselves are celebrating the technological victory that puts them in the expanding coterie of nations sporting launch capability. 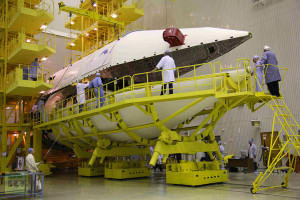 Yamal 402 communications satellite being secured in the fairing prior to launch (Credits: Khrunichev).

When Russia launched a Proton rocket with Breeze-M upper stage carrying Gazprom satellite Yamal-402 on December 8, the Breeze-M’s underperformance stranded its charge thousands of kilometers short of its intended perigee. Since that time, Yamal-402 has been making its own way to the intended orbit. Three out of four boosts using the satellite’s own propulsion system have been completed. “The operation was carried out under the supervision of the Mission Control Center of France’s Thales Alenia Space company,” said Roscosmos spokesman Alexei Kuznetsov. “Its experts reported that the satellite’s engines have operated normally. The planned maneuver was accomplished successfully.” One more boost is planned for December 14-15, after which the satellite should be ready for operation, albeit with a lifetime shortened by a yet-to-be-announced duration.

Following the release of two reports criticizing NASA’s apparent lack of direction and enthusiasm for its stated goals, the US House of Representatives Science, Space, and Technology Committee held a hearing on the subject. While the representatives as well as the witnesses they called seemed to unanimously agree that NASA was on the wrong path, there was no agreement as to what the right path might be. Some representatives suggested revisiting the cancelled Constellation program, others suggested going to Mars, one representative suggested abandoning manned flight altogether and another abandoning anything beyond near Earth orbit to focus on space debris cleanup and planetary defense. Representative Robert Walker suggested selling naming rights of missions to raise funds: “When the GoDaddy Rover is traversing Martian terrain, we will be more solidly on our way to fulfilling our destiny in the stars,” he said, meeting with immediate opposition from other committee members. The hearing, which is the last to be chaired by Representative Ralph Hall of Texas before his colleague Lamar Smith takes over, ended no closer to agreement on a NASA strategy than it began.