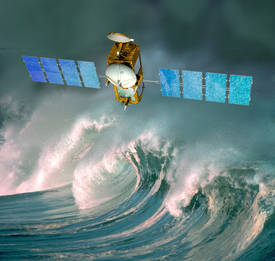 The United States National Oceanic and Atmospheric Administration (NOAA) informed European authorities on November 27th that it would be unable to provide a trio of instruments for the European Polar System (EPS-SG) satellites due to budget restrictions. NOAA also confirmed that it had not secured financing for another transatlantic collaborative project, the Jason-3 oceanic altimetry satellite.

Mary Kicza, NOAA assistant administrator for satellite and information services, said “Regrettably, in light of ongoing budget challenges… NOAA will not be able to provide ATMS instruments for flight on EPS SG. With regard to the other instruments under consideration, NOAA’s budget will not allow for the procurement of the SEM. […] In addition, we have confirmed with the US Department of Defense that while interest in the Low Light Imager remains, current budget realities have eliminated the possibility of that sensor being included for flight on EPS-SG.”

As a result of the announcement, ESA is seeking alternative financing for the instruments, and will likely have to reduce the scope of the mission. One potential option currently being investigated is to contract Northrop Grumman Electronics Systems to provide replacement microwave sounding instruments, as they are already providing a nearly-identical system for NOAA’s Joint Polar Satellite System (JPSS-1) satellite, slated to be launched before 2017.

ESA member states will be meeting in January 2012 to make preliminary decisions on the instruments to be carried on the EPS-SG. A set of proposals on the satellite constellation is intended to be delivered to ESA by March, which could include a contribution by ESA of up to 540 million Euros.

The next generation EPS satellite constellation was originally intended to consist of a constellation of at least two satellites in orbit, each carrying complimentary payloads. Eumetsat had planned to order up to three sets of satellite pairs in order to offer continuous service for 15 to 30 years. The total cost of such a program is estimated at 3.24 billion Euros, in addition to ESA’s contribution.

The video below illustrates the measurements taken from the Jason-2 oceanic altimetry satellite.