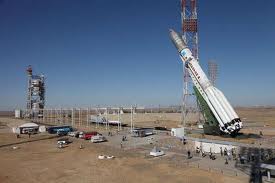 The Proton that launched Express-AM4 being hoisted into position at Baikonour Cosmodrome (Credits: Roscosmos).

In August 2011,  a Russian telecommunication satellite, Express-AM4, was placed in a useless orbit following failure of the Breeze-M upper stage of its Proton launch vehicle. Having exhausted salvage options, Russia will deorbit the satellite this month.

“We have decided to splash it between March 20 and March 26,” said Dennis Pivnyuk, chief financial officer of Russian Satellite Communications Co. (RSCC), the operating company. “While the satellite was not damaged, it has spent seven months in an orbit that exposes it to radiation that has left it in not good shape. There is not much lifetime left.”

Express-AM4 will be placed in a controlled atmospheric descent beginning on March 20. If all goes well, the remnants of the 5,800 kg satellite will land in the Pacific Ocean.

RSCC has plans for a new satellite, already on order with the builder of the original, Astrium Satellites. Astrium has committed to a late 2013 launch date for the replacement craft.

The Breeze-M malfunction that caused the satellite to launch into the wrong orbit had been preceded by several prior failures that resulted in loss of three navigation satellites in April 2011 and a Russian military satellite in February 2011. The remainder of 2011 remained just as challenging for Russian space endeavors, with multiple high profile failures, including a Soyuz failure that resulted in temporary suspension of transportation to ISS and the loss of Mars moon probe Phobos-Grunt, which experienced an uncontrolled reentry earlier this year.

The video below introduces a plan to implement an alternative use of the satellite based on its new orbit. The plan was submitted to Roscosmos which has yet to respond.