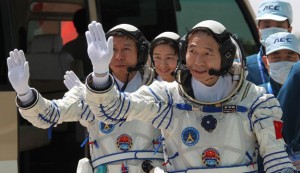 On June 16, China’s Shenzhou-9 spacecraft successfully launched three taikonauts into orbit aboard a Long March-2F rocket. The crew, which includes the first female taikonaut, is slated to make history as the first to dock with and inhabit China’s Tiangong-1 space lab.

“We won’t let you down,” said Liu Yang before the launch that made her the first Chinese woman in space. “We will work together and successfully complete this mission.” Liu flies along with Jing Haipeng, veteran taikonaut, and Liu Wang.

The mission is fueling expectations for increased international collaboration with China, long excluded from space projects such as the International Space Station due to strained relations with the United States. “It is impossible to get access to others’ technologies currently, but with the development of China’s technologies, other countries will gradually open,” said Shenzhou scientist and Long March developer Lu Xinguang. “They will choose to cooperate with us when China has enough abilities.” Recently, however, other space powers have been reaching out to China, who has exchanged instruments with Germany’s DLR and the European Space Agency and whose spacecraft are largely based on Russian technology.

The Shenzhou-9 mission is certainly attracting foreign attention – to the extent that the official Chinese news outlet Xinhua published an article consisting entirely of exerpts from foreign media sources. The manual docking of the capsule, following shortly after Shenzhou-8’s automated docking, is a major technical step forward for a country whose space program was mired in political indecision for many years but has recently progressed quite quickly.

Shenzhou-9’s timetable has not been made public, but it is thought that it could spend up to 20 days in space before returning to Earth. The craft is to make one automated and one manual docking maneuver with Tiangong-1, beginning on June 18. Two crew members will board the station while one remains onboard Shenzhou-9 to handle any emergencies that may arise.

What next for China’s space program? Another Shenzhou mission is inthe works for 2012 and Tiangong-1 is to be upgraded to a larger station that could be inhabited on a permanent basis, akin to ISS. As Cosmonautics News researcher Igor Lisov says: “Now the Chinese are paving their way to create the big orbital forepost.” After that: the Moon.