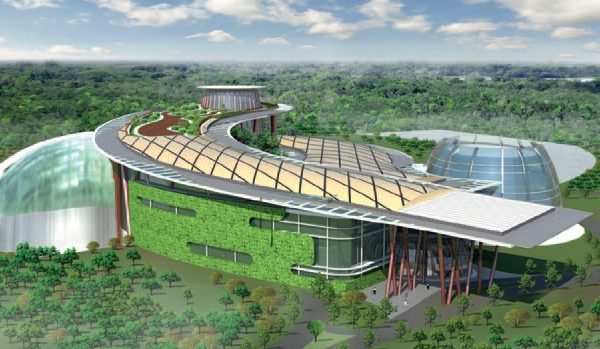 SpaceportSEA (Spaceport at South East Asia), the new facility for commercial suborbital spaceflight that will be built in Malaysia (Credits: SpaceportSEA).

Following a May 7 meeting between the Space Tourism Society Malaysia Chapter and the Selangor State Development Corporation, the location of Spaceport Malaysia has been settled: Malacca.

The selected site now houses Malacca Space Center and Malacca Airport. The space center comprises a university slated to have a  zero gravity laboratory, a space theme park, a spaceresort hotel, a space camp, a museum, and Moon Mall  – a space themed shopping mall. A spaceflight terminal will be added to the Malacca Airport. The entire site is 150 acres and will be connected by a yet to be determined transportation system.

Talis Enterprise GmbH have been eager participants in the spaceport planning. Their Enterprise  suborbital rocketplane will be hosted on the spaceport site and will provide opportunites for zero gravity research in collaboration with the University of Zurich.

The back-up site for the spaceport was Selangor. That site would not have been ready for development for another two years, but remains an area of interest for future space enterprises.

The development of Spaceport Malaysia is being lead by IAASS board member Norul Ridzuan and monitored by the IAASS Suborbital Safety Technical Committee. The committee is chaired by Andy Quinn and Maite Trujillo and is dedicated to emerging technical issues of this new industry. Given the prominence consideration of safety issues has been granted in the initiative, IAASS president Tommaso Sgobba has proposed naming the new facility “The Malacca Safeport.”

The video below illustrates a potential Enterprise flight: