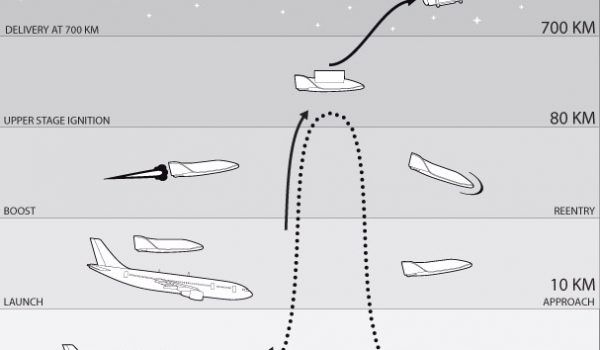 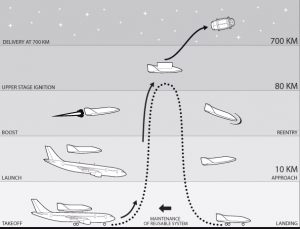 Swiss Space System (S3) has announced a plan to build an unmanned rocket plane by 2017 to launch satellites into orbit.

“S3 aims to develop, build, certify and operate suborbital space shuttles dedicated to launching small satellites, enabling space access to be made more democratic thanks to an original system with launching costs up to four times less than at present,” announced the company. “The first test launches will be carried out by the end of 2017.”

The unmanned suborbital shuttle would be launched from the back of a Zero-G certified Airbus A300 to carry satellites to orbit, thereby serving as a commercial satellite launch platform.  A similar concept has been developed by Orbital Science Corporation with Pegasus, using an expendable rocket instead of a reusable vehicle. S3’s schedule is quite tight since a mock up of the unmanned vehicle is expected to be ready by 2014 and the opening of a commercial spaceport in Payerne, Switzerland, is set for 2015. The spacecraft prototype is planned to be built by 2016 and, if the schedule will be respected, the company will start commercial satellite launches in 2018.

The rocket plane is going to be launched from 10 kilometers, firing its liquid engine to an altitude of 80 kilometers; it will not reach space, commonly taken to begin at 100 km. After the opening of the shuttle’s cargo bay, the satellite will be propelled into space by a rocket engine stage, able to carry 250 kilograms to an altitude of 700 kilometers. The unmanned vehicle will then glide back to the spaceport. An S3 official told Space.com that the system will be able to launch different types of small spacecraft during a single mission. The total investment is estimated to be about $264 million, launch system and spaceport included.

S3 has teamed up with several industry partners for the project, including Dassault Aviation providing the aviation system, SAS with the software, Deimos with navigation, control and mission analysis, Sonaca the structures, and Meggit the sensors. Moreover, the Swiss watch manufacturer Breitlingis is the main sponsor of the enterprise.

Although S3 is planning to invest $53 million in the development of a spaceport in Payerne, where the company is located, the main issue of having a spaceport in Europe is the high density of population. Considering Switzerland’s geographical position, the lack of safe zones like oceans or deserts in case of rocket failure also has to be considered.  Considering these difficulties, the Swiss firm has at the same time secured the operation of its future launch system from Spaceport Malaysia.

Below, VEHRA’s concept by Dassault on which the S3 launching system concept is based on (Courtesy of Dassault Aviation).