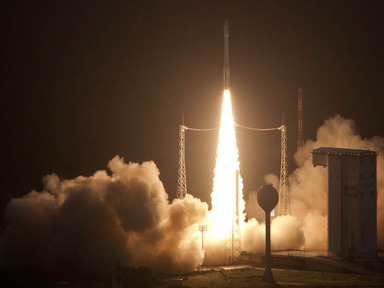 After a long, well-publicized run-up to its inaugural flight, ESA’s new Vega rocket launched flawlessly and on schedule from the Kourou spaceport in French Guiana at 07:00 local time (10:00 GMT). The 30-meter rocket carried  9 scientific satellites into orbit, the largest of which was the Italian Space Agency-developed Laser Relativity Satellite (LARES), weighing in at 400 kg. 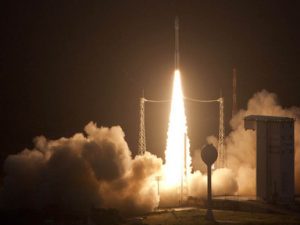 The Vega rocket lifting of from the Kourou spaceport in French Guiana (Credits: ESA).

“Today is a moment of pride for Europe as well as those around 1,000 individuals who have been involved in developing the world’s most modern and competitive launcher system for small satellites” said ESA launch vehicle director Antonio Fabrizi. “Vega will complete the possibilities for space launch for Europe.”

The Italian-built Vega rocket was developed to cater to the rising demand for launching smaller, lighter satellites; it can carry up to 2500 kg of payload into a variety of orbits. Typically, satellites that are too small to be carried on larger rockets such as the Arianne 5 either share the launch with other, larger satellites or are launched on converted Russian ICBMs. However, ESA hopes that the Vega will reduce the months-long wait time for the ICBMs, allow for greater control over launch scheduling, and help maintain competitiveness of the European launch vehicle developers.

The Vega was developed over nine years at a cost of 700 million Euros by seven of the ESA member states, including Belgium, France, Italy, the Netherlands, Spain, Sweden, and Switzerland. Its first three stages use solid boosters, an advanced cost-saving technique that may be used for future evolutions of the Arianne 5 heavy-lift vehicle. In 2004, a Ukranian-developed RD-861G liquid-propellant engine was added to the design and now powers the rocket’s fourth stage.

The Vega rocket prior to launch (click to enlarge) (Credits: ESA).

The largest payload carried during the inaugural flight, the LARES, was built to study a particular effect caused by Einstein’s theory of relativity. It uses 92 reflectors on its surface to make very precise range measurements from Earth, in the hopes of detecting a phenomena known as “frame dragging.” Also known as the “Lense-Thirring” effect, it describes how the rotation of the Earth twists local spacetime.

Also launched were eight small satellites, mostly developed by universities and weighing no more than a kilogram each. Three of these satellites were the first ever space payloads originating from Poland, Romania, and Hungary. They were released into orbit 15 minutes after the Lares was successfully orbited.

The video below shows the Vega launching from Kourou spaceport in French Guiana.
[youtube http://www.youtube.com/watch?v=j_Xk7wzlF4o]