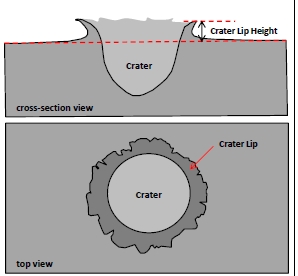 Illustration of the crater and lip typically formed when a micrometeoroid impacts a metal surface (Credits: Orbital Debris Quarterly News).

As International Space Station Expedition 35 undertakes a challenging series of extravehicular activities, they face one hazard that may not immediately come to mind: micrometeoroid damaged handrails.

The problem of micrometeoroids and small debris impacts in space is well known. The station is shielded to prevent the dings and dents it receives from damaging critical systems. Spacewalkers’ suits are shielded too, so that a (small) stray rock doesn’t puncture their life sustaining shell. But spacewalkers have to hold onto something as they maneuver around the station and that something is handrails. The longer those handrails are exposed to space, the more likely they are to have been pockmarked by repeated micrometeoroid impacts.

When a micrometeoroid impacts a hard, non-brittle surface such as a metallic handrail, it commonly produces a crater. These craters frequently sport rough, jagged rims. When an astronaut grips a surface with an exposed jagged rim, he is liable to rip his space glove. In some cases, impacts have produced a sharp spalling protrusion also capable of ripping space gloves. A significant glove tear could risk depressurization and, if not dealt with quickly, death of the astronaut. A 34.8 cm long handrail returned from ISS aboard STS-135 had six such craters after an 8.7 year sojourn in exposed space. 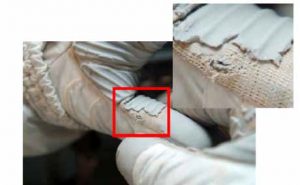 Astronaut Rick Mastracchio had to prematurely terminated his thrid EVA on STS-118 when he noticed a potential tear in his left glove (Credits: Orbital Debris Quarterly News)

The April issue of Orbital Debris Quarterly News carries an article by E. Christiansen and D. Lear outlining this problem and summarizing the solutions that have been  implemented. NASA began studying the issue after a series of cut-glove incidents during Space Shuttle EVAs, two of which resulted in premature termination of the spacewalk. These incidents cannot be definitively linked to micrometeoroid craters, but according to Christiansen and Lear, such craters are a leading culprit. As immediate steps, NASA thickened its glove material to provide extra protection. Now, handrails and the handles of externally stored tools are closely monitored for potential glove hazards and a database of known craters and their locations is maintained and used for EVA planning. For craters that pose significant threat to astronauts, ISS has on hand special clamps designed to entirely enclose the handrail region that has been damaged to prevent accidental contact. Christiansen and Lear report that the number of cut-glove incidents has been “greatly reduced” as a result of these measures.