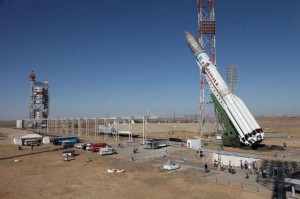 Proton-M is lifted into position at Baikonur (Credits: Roscosmos).

Kazakh officials have responded to the Kremlin’s demands for clarification to a statement made last month by Taglat Musarbayev, the head of Kazakh space agency Kazcosmos. In the original statement, Musarbayev announced that Kazakhstan would be aiming to reduce the number of Proton-M launches from Baikonour Cosmodrome, located in the Kazakh Steppes region. Musarbayev wants greater sovereignty over the launch complex adding that “the town of Baikonour could come under the Republic of Kazakhstan’s jurisdiction.”

Former Mir cosmonaut Musarbayev’s statement was seen to be made as a response to Russia’s backing out of a contract which had agreed to build a new Angara rocket launch facility at Baikonour. He also stated plans to revise the lease agreement between the two nations. The current lease is due to run until 2050, and is worth $115 million USD per year to Kazakhstan, who has leased the complex to Russia since they inherited it after the fall of the Soviet Union. Due to the uncertainty of the current partnership, Musarbayev wanted to end the lease early, and possibly set up a new non-lease based agreement which would enable Kazakhstan to capitalize on the economic benefits enabled by its own space program, specifically with regards to increasing its own communications infrastructure, and also by developing the world’s oldest cosmodrome into a centre for the development of other high-tech products and industries.

In response to the Kremlin’s demands for an explanation, Ilyas Omara, spokesman for the Kazakh Foreign office pointed out that Kazcosmos was eager to continue working with Russia. “It would be very wrong on our part to miss the opportunity of a tighter cooperation with such an esteemed space power as Russia in terms of using our own space port” said Omara.
In late December 2012, Russia allocated its new space budget, valued at 2.1 trillion rubles ($69 billion USD) which included a significant amount of funding to maintain Baikonour until 2020.

Baikonour is currently the only access for crewed missions to the ISS, although Russia is currently looking to develop the new Vostochny Cosmodrome, which is intended to reduce dependency on Baikonour. Vostochny Cosmodrome began construction in 2011 and is scheduled for completion in 2018, having met with several delays that have moved the project back.
Whatever the outcome of the current political disagreements, based on the recent Russian financial commitment to Baikonour, and based on Kazakhstan’s response calling for greater cooperation, it can be surmised that both nations intend to maintain the lease of Baikonour until at least 2020. Given that Russia wishes to reduce dependency on Baikonour, and that Kazakhstan wishes to end the lease early, what will happen to the lease after 2020 is anybody’s guess.

The video below shows the planned Vostochny Cosmodrome: