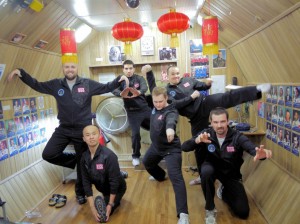 Closer cooperation between Europe and China may be the way of the future. Above the Mars 500 analog crew, including three Russians, two Europeans, and one Chinese, celebrate Chinese New Year in “space” during their 520 day mission (Credits: ESA).

The European Space Agency (ESA) is considering a possible cooperation with China on human space missions by the end of this decade, says the head of the European Human Space Flight and Operations Directorate, and former German ESA astronaut Thomas Reiter.

“I would welcome a European astronaut flying aboard a Chinese spaceship,” said Thomas Reiter to The Associated Press.  He also mentioned that in order to prepare for a future joint mission, some European astronauts are already learning Chinese.

This is in response to the fact that, “the main driving force behind the possible China-EU cooperation would be that the ISS will supposedly be out of service around 2020, while according to official plans, China will establish its own manned space station in the same year, making it possibly the only operating space station in the future,” according to Pang Zhihao, a renowned Chinese space science expert. Reiter said that ESA considers it a possibility for China to participate in the future of the ISS if the objections of the US are overcome.

After the United States and Russia, China is the third nation to develop the capacity to launch humans into low Earth orbit. The European Space Agency does not have capability to send astronauts into space and since the US retired the space shuttle program last year, ESA has to rely on Russia for access to the International Space Station.

According to Reiter, the European Space Agency and China National Space Administration are planning meetings to look at the possibility to find an agreement on collaborative activities such as astronaut training, life science research and spacecraft docking maneuvers. It remains to be seen if the political negotiations will be successful, as they require agreement with both the Chinese and ESA Member states.

The ESA media department and China National Space Administration have not commented on Reiter’s statement yet.

Below, a report on ESA-Chinese cooperation on the EGNOS navigational system: