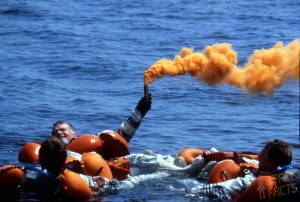 More than thirty years have passed since France became the first Western European nation to send a man in space. For almost two decades, the “high ground” of low-Earth orbit had been the almost-exclusive preserve of the United States and the Soviet Union, although from 1978 a handful of pliable Communist countries in Eastern Europe and Asia had sent their own token cosmonauts into space aboard Russian Soyuz vehicles. The Premier Vol Habité (“First Manned Flight”) of Frenchman Jean-Loup Chrétien in June 1982, however, was something different: the first occasion on which a Western-aligned pilot had flown with the Soviets. Today, Chrétien’s mission can be seen for what it was—a cynical piece of political gameplay in the deep, cold years of the late Cold War—but it also served to establish France on a remarkable journey which has seen its men and women involved in numerous pivotal missions throughout the 1980s, 1990s, and into the present century.

Perhaps the best place to begin when reflecting on Chrétien’s flight is with Chrétien himself. Born in August 1938, he came from La Rochelle and grew up in Brittany, the son of a sailor in the French navy and resident of a once-proud nation then under the Nazi yoke. As a child he vividly remembered watching fighter aircraft taking off and landing, and he later told a NASA oral historian that he “had a permanent 3D movie under my eyes.” The sights, sounds, and experiences laid the foundation for becoming a pilot, and at the French Air Force Academy he studied aeronautical engineering. Flying the Dassault Super-Mystère fighter-bomber, the Mirage III interceptor, and later the Mirage F-1, Chrétien became an accomplished test pilot and was selected as a cosmonaut candidate, alongside fellow Frenchman Patrick Baudry, in June 1980.

By this time the selection of France’s first cosmonaut (or “spationaut”) had begun almost a year later, under the auspices of the Centre National d’Études Spatiales (CNES). He and Baudry beat off competition from more than 400 shortlisted applicants to complete the physiological and psychological tests demanded by the Soviets for a mission aboard their Soyuz-T spacecraft to the Salyut space station. Finally, in June 1980, Chrétien and Baudry arrived at the secretive “Star City,” on the forested outskirts of Moscow, to begin their dedicated language and mission training.

Entering the closed realm of Star City it was strange for the two Frenchmen to be working with old Cold War foes. “Just before the selection,” said Chrétien, “I was deeply involved in U.S.-French co-operation … within the south of France, and I was responsible for the organization of exercises over the Mediterranean Sea between the U.S. Sixth Fleet and the air defense system in the south of France. I was really involved and spending a lot of my time on the U.S. aircraft carriers and I was feeling that if, one day, I was going to fly in space, it would be from Houston … so I was very surprised when they asked me to go to Moscow!”

Star City provided the two Frenchmen with a profound cultural shock: small apartments, no telephones—they had to use the base’s telegraph system to contact family members—and Soviet insistence on using the public transport system rather than cars. If they did ride in a car, it was aboard a chauffeur-driven black Volga, which often ferried them to the Marine Club at the U.S. Embassy … and the poor driver was obliged to wait, sometimes until six in the morning, to take them back to their apartments. 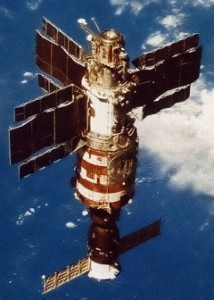 The Salyut 7 complex was the last “monolithic” Soviet space station, ahead of the “modular” Mir (Credits: SpaceFacts.de/Joachim Becker).

Despite the spartan living situation, Chrétien was impressed by the friendliness of their hosts … but disappointed at the official position of CNES toward its first spacefarers. Initially, he and Baudry were told that they would remain at Star City for two years, with only short summer breaks, which had to be spent in the Soviet Union. Chrétien balked at this and prompted a week of talks, involving CNES President Hubert Curien, which ultimately decided to allow the Frenchmen home three or four times per year “for scientific purposes … to follow the experiments.” Curien’s visit also guided the Soviets to agree that Chrétien’s and Baudry’s time, after work, would be their own.

Still, the training was arduous. Theoretical preparation in the classroom, with blackboards and notebooks, was followed in their second year by practical experience in the Soyuz-T simulator, survival training in the Black Sea … and intensive instruction in Russian, one of the world’s most complex languages. The training was given in Russian, the instructors spoke only Russian, and the two Frenchmen were required to not only become functionally adept with the language itself, but also with the technical aspects of their mission, the Salyut station, and the Soyuz-T. In Chrétien’s mind, it was the best possible route to getting his head around the new language.

It was something he tried to convince his superiors in Houston to do years later: get people speaking Russian as soon as possible in the training flow, so that interpreters would not be necessary. “What good are interpreters?” he asked. “Most of the time, they cannot be real technicians. I’ve been following the courses for NASA many times at Star City, taking a group of astronaut candidates. The very first is a waste of time, because half of the time is spent in translation, plus thinking. The guy who translates has to think, so he takes more than half of the time, by definition. At the end, only 30-35 percent of the “useful” time is dedicated to the candidate and there are lots of mistakes during translation, just because the guy does his best, but he doesn’t understand all of it.” Learning Russian as soon as possible was also one of Chrétien’s recommendations for future International Space Station crews; he felt that it doubled, or even tripled, their efficiency.

He and Baudry had spent six months before going to Star City working on the language, 12 hours per day, including Saturdays, although by his own admission it provided them with “the good luggage” but not the fluency. By the end of their first year, in late 1981, they had developed “a good technical package” and they had drawn closer to full fluency in the language, enabling them to integrate effectively with their crews. During their first year, the question of who would fly—Chrétien or Baudry—remained open, which placed two good friends in the decidedly unpleasant situation of being in constant competition. “It’s kind of a poker game,” said Chrétien, “and one of us will be identified, but we don’t think it depends so much on us. It mostly depends on the people and they probably had already their own choice in mind for different reasons.” One of his recommendations was not to place the two finalists in such an unfair position of competition, which he felt impaired their ability to train effectively together. 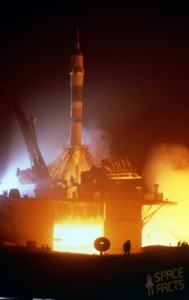 By the end of 1981, two teams were thus training in tandem for the French flight: Chrétien would be joined on the prime crew by Commander Yuri Malyshev and Flight Engineer Aleksandr Ivanchenkov, both of whom had flown in space before. The backup crew would consist of Baudry, teamed with Leonid Kizim and Vladimir Solovyov. Shortly before the mission, however, it would appear that some sort of “personality clash” occurred between Malyshev and Chrétien and the Soviet commander was dropped and replaced by another experienced cosmonaut, Vladimir Dzhanibekov. (In their book Soyuz: A Universal Spacecraft, Rex Hall and Dave Shayler told a different account, noting that Malyshev’s removal was the result of “failing a medical examination.”)

Whatever the truth, at 7:29 p.m. Moscow Time on 24 June 1982, Soyuz T-6 rose perfectly into the darkened Baikonur sky, the brilliance of its rocket exhaust plume illuminating the barren steppe for many miles as Chrétien became only the third “Westerner”—after the United States and Cuba—to travel into space. Unfortunately for the Frenchman, his watch was not properly set to the correct time, “so I was expecting every event at the wrong time,” with everything seeming to occur a minute earlier than it should have. After the tremendous buffeting and vibration of the first stage, a peculiar sense of quietness elapsed for a few seconds before the second stage of the rocket roared to life and continued the boost into space. At first, that boost, and his incorrect watch, convinced him that something had gone wrong … but as he glanced across the cabin to look at Dzhanibekov and Ivanchenkov, they both seemed unperturbed. “Then I understood that it was wrong with my watch,” he recalled, “but I could not … recycle [it during] the ascent, so everything happened in disorder.” Around four minutes after launch, the escape tower was jettisoned, as planned, and the cosmonauts—and France’s first man in space—were granted a glimpse of the Home Planet, far below.