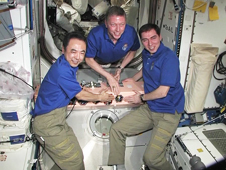 Command of ISS now devolves upon Expedition 30 Commander Dan Burbank, who docked with ISS on November 16 along with Flight Engineers Anton Shkaplerov and Anatoly Ivanishin. The remainder of the Expedition 30 crew is scheduled to launch to ISS on December 21.

The video below reports on the moments before and after the Soyuz TMA-02M landing.