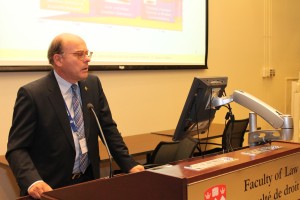 The Space Safety Community gathered in Montreal for the 6th IAASS conference “Safety is not an Option” on May 21. Hosted by McGill University, the conference started with a plenary session chaired by Paul Kirkpatrick, head of the IAASS Technical Training Committee, and Rahm Jakhu, head of IAASS Legal and Regulatory Committee.

Tommaso Sgobba, IAASS President, opened the conference with a presentation titled “The Time to Organize Space Safety is NOW,” which highlighted the challenges that the emerging commercial space venture is facing. We discussed with him some key points of his talk.

“Civil and commercial space operations are becoming more and more intertwined with those of civil aviation, both in the airspace and in outer space,” says Sgobba. As an example, he explains how air traffic is highly reliant on space based infrastructures such as global navigation, weather forecast and telecommunication. Conversely, reentry of human-made space object affects the safety of commercial aviation, thereby requiring a tight integration between air and space traffic management.

According to Paul Dempsey, Director of the Institute of Air and Space Law, the next-generation spaceplanes will present a flight profile that will blur the distinction between ascent, operation and reentry, leaving the ground as airplanes, climbing to space as rockets, reentering the atmosphere as spacecraft and landing as gliders. Their intercontinental range will require an international coordination based on agreed principles and rules. 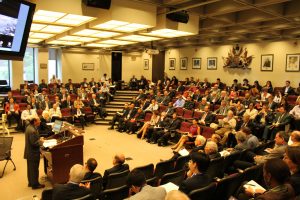 “The space legal regime is a catastrophic mess,” adds Dempsey. “Over the next decade, the technology will make point to point suborbital transportation possible, but without uniform rules there is the potential for hampering progress.”

Sgobba believes that “the aerospace Industry should develop a notion of space safety and sustainability as a collective responsibility,” adding that companies should associate to take the lead in establishing, adopting, and enforcing standards of excellence which ensure continuous improvement of vehicles safety and operational sustainability.”

According to Sgobba, a possible approach would be to extend the mandate of the International Civil Aviation Organization (ICAO) up to geosynchronous orbit, covering civil and commercial space situational awareness for launch, reentry and on-orbit operations. The “extended ICAO” would then promote the development of a set of interoperability rules between civil and military space situational awareness and traffic control, and would issue safety rules for commercial spaceports. “This way,” Sgobba concluded, “ICAO would become responsible for space traffic control, space environment protection, and, more in general, for integration of air and space traffic management.”