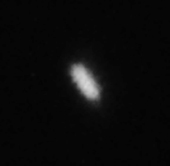 The Soyuz upper stage of the recent Progress 58 launch on February 17 passed a day later at just 166 kilometers above the ground with an angular speed of more then 2 degrees per second, rawly twice the angular speed of the ISS. The booster reentered the Earth atmosphere 10 hours later. The object was tumbling but this tumbling motion was too slow to be seen in these 3 frames. However, the images show clearly the elongated shape of the rocket upper stage. I have attached another observation of a Zenit rocket that was tumbling much faster, and then the tumbling motion becomes clearly visible while it crosses the field of the telescope. The instrument used for both observations was a 25 centimeters aperture reflecting telescope with attached CCD equipment, operating in the secondary focus.

Some Words about Technique

Tracking these tumbling rocket stages manually is difficult and requires lots of experience. Not only is the speed of low orbiting rockets very high but when they are tumbling, they go off and on, dimming and brightening again when they rotate in the sunlight. The booster often disappear completely in the tracking scope, causing you to lose it out of field. When it appears again, you have to center it on the crosshairs as fast as you can before it dims again, a very intense activity do that at those high speeds.

Observation of tumbling Zenit 2nd stage of a launch in 2011