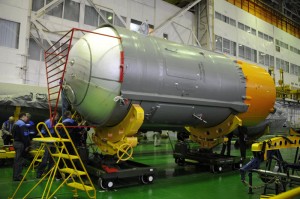 UPDATE: Some clear color views of the Soyuz-U rocket 3rd stage, which orbited the Progress M-14M.  The rocket will have reentered and decayed in meantime. Analyses of the obtained imagery suggest a relatively steady behave of this rocket compared to much more turbulent tumbling observed with other Soyuz launches. This was fairly well confirmed by the reasonable steady visual appearance during the pass.

On January 26, the Progress M-14M  lifted up as the first resupply ship of the new year  on its way to the International Space Station. It docked with the stations Pirs module on January 28, where it will remain until April 24, 2012.  A day after the launch, the Soyuz U third stage or (SL-4 R/B) passed over Europe, and became visible from my observing location passing 48 degrees culmination through the South-southwest. 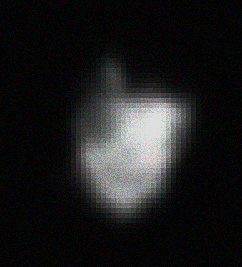 The altitude of the rocket was 176 km, with a range of 233km. It was the second time I shoot a  rocket upper stage from a Progress launch (the previous one was Progress M-13M third stage, photographed on October 31, 2011, the first  Progress launch the Progress M12-M failure of August 24). The Progress M-14M imaging session provided enough frames to allow studying the rotational/tumbling behavior once again. It was the 4th time I successfully captured the tumbling motion of a Soyuz-U rocket stage in orbit. The animation clearly shows the curvature of the rocket cylinder caused by the angle. The dark shade visible on the upper side indicates that we look at the rocket end where  the engines are mounted.