The Keyhole satellites are a family of reconnaissance satellites launched by the US National Reconnaissance Office (NRO) since the mid-seventies. They are known under different code names, but often named Evolved Enhanced CRYSTAL (EEC).  Observers recognize them mostly as KH-11 KENNAN satellites. The later versions are actually newer types often classified as KH-12 or Advanced KENNAN or Improved Crystal. It is often said that the Keyhole satellites are similar to the Hubble Space Telescope. According to sources they were shipped in similar  containers and a NASA history stated that they used military Keyhole technology in the Hubble to minimize costs. In 2011, NRO offered NASA two surplus Keyhole satellites. On that occasion, NASA engineers were able to visit the KH-hardware. It was reported that the focal length of the Keyholes was shorter then that of the Hubble. The shorter telescopes enabled the military to oversee larger areas on Earth. This gain of the Keyholes over the astronomical Hubble was interesting for NASA as it could assist research in different astronomical fields.

Factory images of these satellites are never published due to the military character. But insiders developed models of the possible design of the Keyholes. It is unlikely that they are exact copies of the Hubble because the different purposes require other properties resulting in a different design. But it’s likely that they look basically the same. Most likely there are other types of solar panels used for the Keyholes as well. Ground based imagery can rarely prove this.

In 2010, I managed to photograph some of the Keyhole satellites in rare favorable occasions. The image below shows the KH-129 satellite captured on September 4, 2010 from a range of 336 kilometers, taken during a pass not far from the lowest point of the orbit of the satellite, even below the  orbit of the International Space Station. The image was recently re-processed with newly improved techniques and is now more interesting. 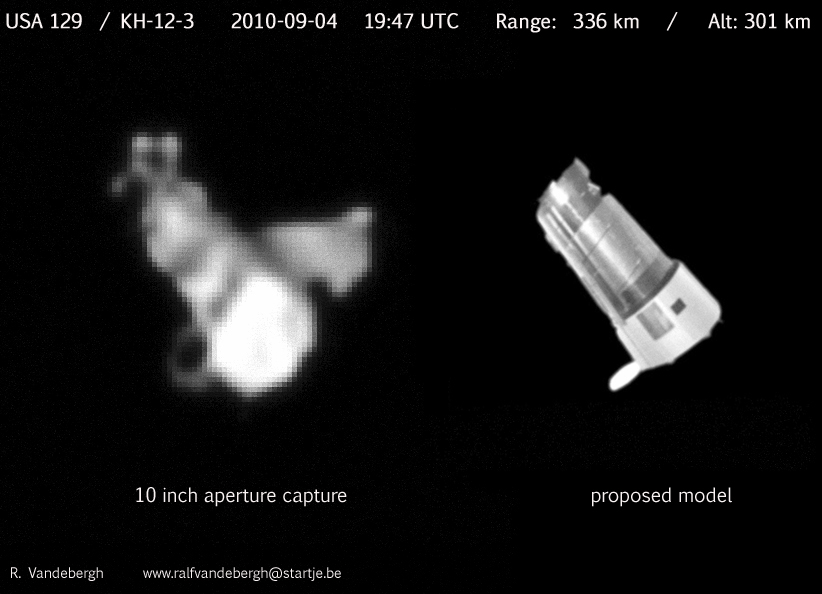 On the left we see the actual image taken with a 10 inch aperture telescope, on the right we see one of the proposed models developed by insiders. There seem to be incredible similarities. Note especially the thicker bright part of the telescope-tube below. Also some segments in the tube appear to be visible. Interesting are some elements that are mounted on the satellite that could be satellite dishes or solar panels. The biggest difference from the model is the big structure on the right side of the tube that is most likely a solar panel. Although the smaller structure on the left side of the tube suggests something like a dish antenna, it is probably the other solar panel. Other imagery taken a day later with the same setup under different circumstances seems to confirm the second solar panel. This and other images of the KH-129 also suggest an aperture door like on the Hubble. This is the structure visible on top of the image but it could also be some other element that we not know.

Imagery like this can be seen as a demonstration to learn what is actually possible to obtain from the ground with small to medium equipment even without advanced imaging techniques.

The lower resolution image below was taken exactly one day later under different circumstances including a slightly different viewing angle and confirms most of the details visible in the main image above. Although the atmosphere was less stable we still can see the main elements. 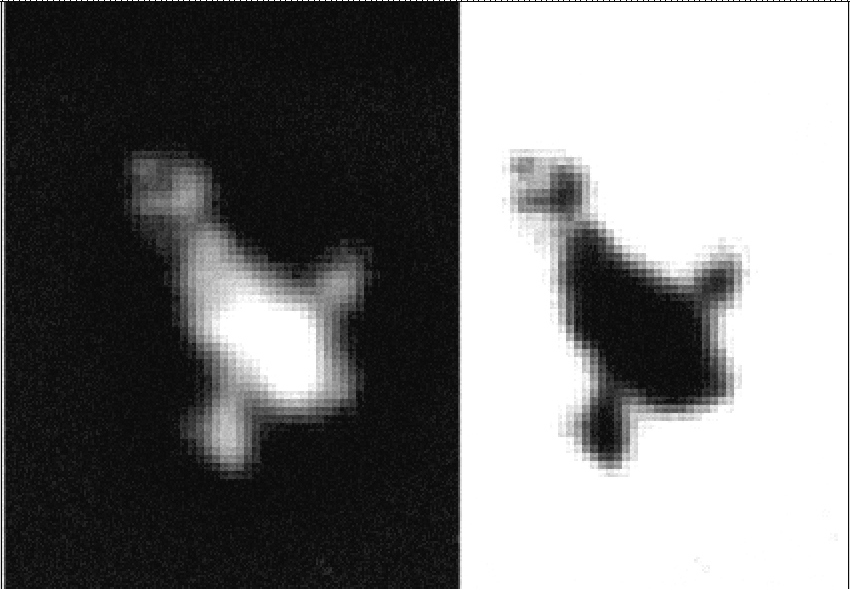