Recent data from Voyager 1 have led NASA scientists to believe that the deep-space probe has reached a region where charged particles from beyond our solar system have a significantly increased intensity.  This indicates that a historic milestone is drawing close. 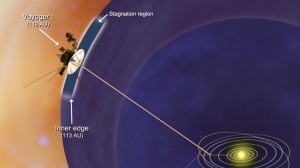 Voyager 1 has entered a new region between our solar system and interstellar space, which scientists are calling the stagnation region (Credits: NASA/JPL-Caltech).

“The laws of physics say that someday Voyager will become the first human-made object to enter interstellar space, but we still do not know exactly when that someday will be,” said Ed Stone, Voyager project scientist at the California Institute of Technology in Pasadena. “The latest data indicate that we are clearly in a new region where things are changing more quickly. It is very exciting. We are approaching the solar system’s frontier.” The Voyager spacecrafts are built and operated by NASA‘s Jet Propulsion Laboratory and are a part of the NASA Heliophysics System Observatory. The antennas of NASA’s Deep Space Network receive the data from the telescopes of the spacecrafts, and recorded the increase in the number of charged particles, which were generated from supernovae in our solar system’s proximity. “From January 2009 to January 2012, there had been a gradual increase of about 25 percent in the amount of galactic cosmic rays Voyager was encountering,” said Stone. “More recently, we have seen very rapid escalation in that part of the energy spectrum. Beginning on May 7, the cosmic ray hits have increased five percent in a week and nine percent in a month.” The scientists need three basic indications before they can declare this important milestone as a fact. The aforementioned increase in the charged particles, the significant decrease of energetic particles generated inside the heliosphere, and finally the change in the direction of the magnetic lines surrounding Voyager. 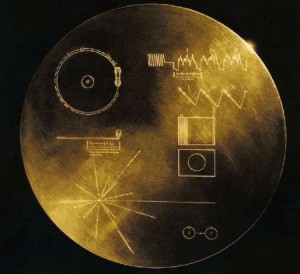 The heliosphere-generated particles have been declining in intensity, but their levels have not yet reached the low threshold which would indicate that the spacecraft has broken through the solar system’s boundary. At the same time, the magnetic lines around Voyager, still have an east-west direction, but when it passes into interstellar space, they are expected to acquire a more north-south inclination. “When the Voyagers launched in 1977, the space age was all of 20 years old,” said Stone. “Many of us on the team dreamed of reaching interstellar space, but we really had no way of knowing how long a journey it would be — or if these two vehicles that we invested so much time and energy in would operate long enough to reach it.” The scientists will continue to analyze the data sets received by the spacecraft’s telescopes, but they remain optimistic that a new era of space exploration will soon be a reality. [youtube http://www.youtube.com/watch?v=zidTu5SjH3o]