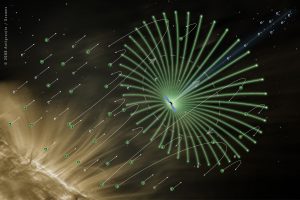 The electronic solar sail (ESAIL) is a technology that utilizes the solar wind  to provide propulsion to a spacecraft. Not to be confused with the more commonly studied solar light sail, ESAIL captures momentum from the solar wind by means of an electric field generated by a web of long wire tethers. Invented by Dr. Pekka Janhusen at the Finnish Kumpula Space Centre in 2006, this space propulsion concept offers a potential chance for a fast, cheap, and propellant free mode of transportation throughout the solar system.

The propulsion system is composed of an array of tethers that convert the electric potential of the solar wind into electric propulsion. A tether consists of several aluminum wires that are joined together at intervals of a centimeter, making them resistant to the micrometeoroids present in the interplanetary environment. Experts previously questioned the feasibility of producing wires of the necessary length for the ESAIL; however, using an ultrasonic welding technique makes it possible today. A full scale sail would consist of 100 such tethers with a linear length of 20 km.

The sail operates with no propellant and has an unlimited operating time, as long as the solar panels are operating.  This system creates a charged electric array, producing a static electric field, that interacts with the moving electric field produced by the solar wind.  The positive ions of the solar wind transfer their momentum to the array through electric field interactions.  This force could accelerate a 1000kg spacecraft, equipped with an array composed of 20km linear length tethers, at a rate of 1mm/s2, which if operated for 1 year could accelerate a spacecraft to 30km/s – faster than any current manmade spacecraft.  To keep the spacecraft charge neutral it would also have to eject the negative charge which would accumulate on the spacecraft through an electron gun, which would transmit very little propulsive thrust.

It is planned that the electric sail will be tested on the ESTCube-1 satellite, an Estonian small satellite to be launched in March 2013. This test will deploy a 15-meter long tether and measure the resulting forces. The Aalto University plans to launch Aalto 1 in 2014, with a 100m tether, scaling up the project. The EU subsidizes the ESAIL project with 1.7 million Euros.